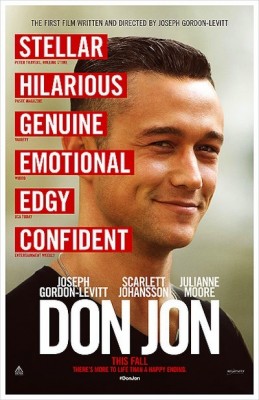 You know how sometimes you into a movie with a certain expectation of what you’re going to see? You’ve seen the trailers and they’re cut a certain way giving you the impression that a movie is going in one direction and then you go to see it and it turns out to so much more. Well that’s what happened with me when I watch Joseph Gordon-Levitt’s new movie “Don Jon”. (In theaters everywhere Friday, September 27th)

This is where the movie makes an unexpected turn. There’s a surprising amount of layers and depth to not only the story but with Jon as well. A chance encounter with fellow night school classmate Esther (Julianne Moore) is the turning point for this character and you slowly see another side to him that he himself was unaware even existed.

This movie has a lot of heart and soul to it and hidden depth that draws you in unexpectedly. Recently I had the chance to chat with the cast about the movie.

How do you feel the film comments on youth and relationships and sex in comparison to the sort of classic 80’s youth films?

Well it’s a movie about how we can sometimes have unrealistic expectations of each other and how media can contribute to that. Personally working in the media, working as an actor in TV and movies my whole life and especially in the last few years I’ve been hearing it a lot when people say oh I wish that my life was like it was in that movie or I wish that I had someone like you in that movie and when I hear that frankly I get a little startled sometimes because real life is not as simple as it is on screen. I think real life is a lot more beautiful. There’s a lot more details and nuances that you could never possibly capture in a movie or on a TV show or in a pornography clip or in a commercial or in a pop song. So we kind of wanted to poke fun at comparing your real life to these expectations.

Joe obviously you wrote this film and the bigger picture is that it’s about addiction. What was your research when you were writing this movie, how you became inspired to write it?

I think I was largely responding to the way that people seem to be reacting to all kinds of media and I thought a story about a young man who watches too much pornography and a woman who watches too many romantic Hollywood movies would be a good way to sort of bring to light the way we all sort of relate to all kinds of media. Weather it’s pornography or a commercial about a hamburger, you see a woman on a screen and you just reduce her to a thing a sex object and that’s something I’ve been aware of really my whole life. My mom was always intent on making me aware of how that a very common thing that happens in media. You know my mom was very active in the 60’s and 70’s in the feminist movement and she was always really keen to make my brother and me aware of this happening so it’s something I’ve always thought of.

Uh yeah! In a lot of ways it is, it’s me writing a comedy about a lot of the wisdom that she wanted to instill me with and she really loves the movie actually. She was one of the first ones to read the script and it’s been great getting to talk to her about it.

Was it always a comedy or was there a darker version of it?

Well the original idea in broad strokes I didn’t know it was going to be a comedy and I was trying to figure out how it would be and I hadn’t landed on anything that I liked until I was actually working on 50/50 and I’m up there in Vancouver with Seth Rogan and his whole gang. I really like the movies that he makes I mean 50/50 is sort of it’s a comedy but it’s a character-based comedy. When I was in the middle of that I was like oh what if I approach this concept with this tone and that’s when it really took off in my mind and I really started writing it.

This one’s for Tony. You and Joseph worked together for what seems like a lifetime ago…

Oh right for him…

For him lol he was just a kid in Angel’s in the Outfield. What’s it like now so many years later and he’s basically running the show as writer, director, actor and it’s his company behind it (HitRECord Films). What was the experience like for both of you?

He gave me the job! It’s starts from there. You know I’ve always had a paternalistic thing for Joe who was 12 when we worked together. Even then you could see that he was not only a talented kid but he was driven. He used to say he wanted to follow the director instead of hang out with me, which is a crazy thing.

I know, I know. I’m just kidding. But I took a lot of pride, I felt great for him because I knew this was important and I’ve said this and I don’t wanna just kiss his ass in public but I think the writing is really the thing that stands out. He’s a very good director he’s a very strong hand, a very clear vision. It’ makes it makes it very easy for you. Everybody’s having fun. But the writing’s very strong and very easy. I said to him and I hate to say this but I said, “You wrote this?” when I got it. I’m just thrilled to be part of it.

No and I don’t think that either Jon or Barbara are meant to be all girls are this way and all boys are this way. These are two examples of characters that like you said are really intent on fitting into dominant ideas, conventional ideas. The character that Julianne plays, Esther, is an example of someone who is very much her own person.

Which is why I liked it. I thought upon reading the script that the great thing about Esther is due to her circumstances she’s someone who can’t be anything less than 100% authentic which is a hard thing to be but because of where she is she doesn’t have the energy or the strength for anything else so she’s literally is going from moment to moment. Joe wrote her in contrast to these other characters who are very much trying to have their behavior described by a gym culture, by a club culture, by a romantic comedy culture, a porn culture, a religious one. There are all these things we set up we think they’re guidelines but they can be they can entrap you.

Well the hardest part was the very beginning alone. Because I think any time you set out to make something anybody is going to be confronted by those voices in your head that say you don’t need to do this someone else can do this better you should probably quit right now. Certainly I met those voices too and those are difficult to overcome. I think the only reason I did finish writing the script is because I was having a lot of fun doing it. I thought well maybe it wont come to anything I’m not going to worry about that now this is making me laugh I’m having a good time so I’m going to keep writing it. And then once I had a draft I started showing it to people and once I got some positive feedback Scarlette was one of the first people that I showed it to. When she really liked it and we had these really interesting conversations based on what I had written, those voices of doubt started going away being replaced by voices of real people. There was still a ton of work to do, hard work but from that point forward it was a different kind of challenge.