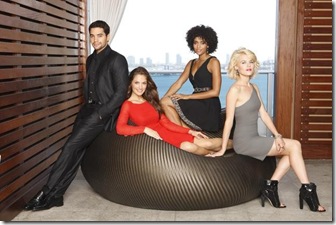 Once upon a time, there were three bad little girls… Wait! Scratch that!

Miles Millar & Alfred Gough of Smallville fame have moved Charlie’s Angels [ABC, Thursdays, 8/7C] to Miami, added a bit of grit, gunplay and death, but somehow managed – for good or ill – to maintain that aura of gloss that made the original angels pinup goddesses.

The opening credits recall the original, minus the seeming condescension, and play into the identity of the angels before lowering the boom and letting us know in no uncertain manner that this show isn’t quite as glossy as the original.

Angel With A Broken Wing finds the angels rescuing a kidnapped teenage girl who was bound for slavery – but their celebration of the successful conclusion of the operation is marred by the death of one of them when her car explodes.

When a security camera shows a woman speeding form the scene on a motorcycle, the surviving angels – Abigail Simpson [Rachael Taylor, Grey’s Anatomy] and Kate Prince [Annie Ilonzeh, General Hospital] – track her to a boat and confront her. She is Eve French [Minka Kelly, Friday Night Lights], a colleague of the late Gloria Martinez [Nadia Velasquez] – but not, it appears, a viable suspect [a gunman in chopper tries to kill all three women].

It turns out that Gloria had tracked down a former Central American death squad leader who is now a renowned philanthropist – who uses the orphanages his company builds in Central America to provide him with a supply of young girls to sell into slavery.

Aided by the Townsend Detective Agency’s computer hacker and ladies’ man, John Bosley [Ramon Rodriguez, The Wire], the angels and Eve set out to take down the slaver.

Angel With a Broken Wing is as fast-paced, as you’d expect, with a fair bit of violence – choreographed to be somewhat nastier than in the earlier series – and every bit as slick. The angels are all gorgeous, sexy, tough and smart – but they don’t always think things through. There’s also a bit of irony in Abby – the former cat burglar – not buying Eve’s protestations of innocence, even after that airborne gunner tries to kill them all [good thing Charlie’s big on second chances…].

Director Marcos Siega does a nice job of taking a script that has a few too many plotholes and making them a bit harder to see, what with the glitz and glam and all. Unlike the original series, though, Charlie’s Angels 2.0 actually has some potential. The cast is capable, though we don’t really see much of that in the premiere [Kelly is a particularly disappointment, but Rodriguez – who was so good on The Wire – seems to be playing down to the material here, and that’s a bit of a distraction].

Because I liked Taylor on Grey’s Anatomy, and Rodriguez on The Wire – and because Millar & Gough’s Smallville was so entertaining – I’m willing to give Charlie’s Angels the benefit of the Three-Ep Rule, but the show hasn’t improved drastically after three eps, I’m moving on.

Photo by Bob D’amico/courtesy of ABC