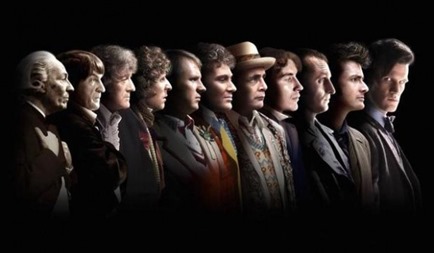 See the 50th Anniversary Doctor Who Special, The Day of the Doctor in 3D! BBC America announced this morning that there will be two RealD® 3D screenings of Doctor Who: The Day of the Doctor – one as part of the global simulcast of the program on Saturday, November 23rd, and one on Monday, November 25th. The special screening will feature specially shot introductions and will be followed by a 10-minute featurette, The Day of The Doctor: Behind The Lens featuring Matt Smith, David Tennant and Jenna Coleman with Billie Piper and John Hurt, as well as lead writer and executive producer Steven Moffat, who discuss their 50th Anniversary experiences.

The 3D screenings will be held in association with AMC Entertainment Inc, and Regal Entertainment Group – with tickets to go on sale Friday, October 25th at 9:30am ET for theater locations in eleven US cities: New York, Los Angeles, Chicago, Philadelphia, Seattle, Washington DC, San Francisco, Dallas, Houston, Atlanta and Minneapolis. Tickets may be purchased at Cinemark.com and Fandango.com.

ELEVEN U.S. CITIES TO JOIN FIRST GLOBAL SIMULCAST ON NOVEMBER 23 EXPANDING TO OVER 300 CINEMAS FOR ONLY ONE NIGHT WITH NCM FATHOM EVENTS ON NOVEMBER 25

In association with AMC Entertainment Inc., Cinemark Holdings, Inc., and Regal Entertainment Group, BBC AMERICA makes history by honoring eleven Doctors on Saturday, November 23 with a global simulcast 3D screening event in eleven cities at the same time the 75-minute Anniversary special premieres on BBC AMERICA and across the globe. Tickets for the Saturday, November 23 screenings will go on sale October 25, 2013 at 9:00am EST for theater locations* in New York, Los Angeles, Chicago, Philadelphia, Seattle, Washington DC, San Francisco, Dallas, Houston, Atlanta and Minneapolis. Tickets may be purchased at Cinemark.com and Fandango.com.

The festivities won’t stop there: BBC AMERICA and NCM Fathom Events are teaming up for the first time to continue the celebration, giving fans across the U.S. a chance to experience Doctor Who: The Day of the Doctor in RealD™3D on Monday, November 25 for only one night in more than 300 select cinemas. Tickets will be available at participating theater box offices and online at www.fathomevents.com. For a complete list of theater locations and prices, visit the NCM Fathom Events website (theaters and participants are subject to change). The event will be broadcast via the new digital cinema projection systems.

Soumya Sriraman, EVP Home Entertainment and Licensing for BBC Worldwide North America, commented: “Doctor Who’s 50th Anniversary is truly a global celebration and we’re thrilled to bring the special to the silver screen. Our partnerships with Cinemark, AMC, Regal Cinemas and NCM Fathom Events will give fans, on November 23 and 25, the opportunity to see the Doctor in a whole new way – in RealD™ 3D.”

Since its launch in 1963, Doctor Who has become one of the world’s best loved dramas and is certified by the Guinness Book of World Records as the most successful sci-fi series ever.  Doctor Who is BBC AMERICA’s highest-rated series and has received numerous awards across its 50 years. The series has enjoyed success off-air with over 10 million DVDs and 8 million action figures sold globally and is the BBC’s top series on iTunes in the U.S. and UK. BBC Worldwide, the commercial arm of the UK broadcaster, distributes Doctor Who to over 200 territories across the world.

“The Day of The Doctor is upon us and fans of the BBC AMERICA sci-fi series Doctor Who have the opportunity to see the time-travelling adventures like never before in 3D from their local movie theater,” said Shelly Maxwell, executive vice president of NCM Fathom Events. “There’s never been a better time to be a Whovian during the 50th Anniversary celebration of this huge BBC hit that’s invaded America .”

The U.S. in-theater exclusive, a behind-the-scenes short of over 10 minutes, will also be available in the UK on www.bbc.co.uk/Doctorwho at the same time.

AMC Theatres® delivers distinctive and affordable movie-going experiences throughout the United States. As of June 30, 2013, AMC owned, operated or held interests in 343 theatres with a total of 4,937 screens primarily in North America and predominantly located in major metropolitan markets.

Cinemark is a leading domestic and international motion picture exhibitor, operating 504 theatres with 5,794 screens in 40 U.S. states, Brazil, Mexico, Argentina and 10 other Latin American countries as of June 30, 2013. For more information go to www.cinemark.com.

Regal Entertainment Group (NYSE: RGC) operates the largest and most geographically diverse theatre circuit in the United States, consisting of 7,334 screens in 575 theatres in 42 states along with Guam, Saipan, American Samoa and the District of Columbia as of September 26, 2013. The Company operates theatres in 46 of the top 50 U.S. designated market areas. We believe that the size, reach and quality of the Company’s theatre circuit not only provide its patrons with a convenient and enjoyable movie-going experience, but is also an exceptional platform to realize economies of scale in theatre operations. Additional information is available on the Company’s Web site at www.REGmovies.com.

BBC Worldwide Limited is the main commercial arm and a wholly owned subsidiary of the British Broadcasting Corporation (BBC). BBC Worldwide exists to support the BBC public service mission and to maximise profits on its behalf. It does this through investing in, commercialising and showcasing content from the BBC around the world, in a way that is consistent with BBC standards and values. The business also builds the reach and reputation of the BBC brand overseas and champions British creativity.