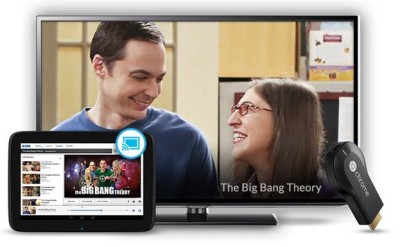 CBS has announced that content from the CBS App and CBS.com – including the CBS All Access subscription service – can now be accessed via Chromecast devices. Details follow the jump.

Content From the CBS App and CBS.com, Including the CBS All Access Subscription Service, Can Now Be Viewed via Chromecast Devices

NEW YORK – May 14, 2014 – CBS Corporation today announced that CBS Television fans now have the ability to cast CBS content from CBS.com and the CBS App, including content from the CBS All Access subscription service, to televisions using Google’s Chromecast.

Subscribers to CBS All Access, the CBS Television Network’s digital subscription video on demand and Nielsen-measured live streaming service, will be able to cast all that the service has to offer to their televisions. For $5.99 a month, the service offers more than 7,000 on-demand episodes from the current season, previous seasons and classic shows on demand, as well as the ability to stream local CBS stations live in more than 20 markets, including New York, Los Angeles, Chicago and Philadelphia, with more to be added each month.

Chromecast is the latest OTT device added to CBS’s digital distribution platforms. It joins CBS All Access’ recent launch on the Roku platform, in addition to CBS All Access’ availability online at CBS.com and on smartphones and tablets through the CBS App. CBS All Access will be available on more major connected device platforms in the coming months as well.

To enable casting through the CBS App for either iOS or Android, users must be on to the same wireless network as their Chromecast device, open the CBS App, select an episode and then tap the Cast button in the top portion of the video player.  Users also have the ability to simultaneously browse more episodes on the CBS App without interrupting the content they are watching through Chromecast.

To use Chromecast to watch CBS programming through CBS.com, users should download Google’s Chrome browser and the Google Cast extension, then log on to the same wireless network as the Chromecast device and click the Cast button in CBS.com’s video player.

CBS Interactive, a division of CBS Corporation, is the premier online content network for information and entertainment. With more than 280 million people visiting its properties each month, CBS Interactive is a top Web property globally. Its portfolio of leading brands, which include CBS.com, CNET, CBS.com, CBSNews.com, CBSSports.com, TVGuide.com, GameSpot, TV.com and Last.fm, span popular categories like technology, entertainment, sports, news and gaming