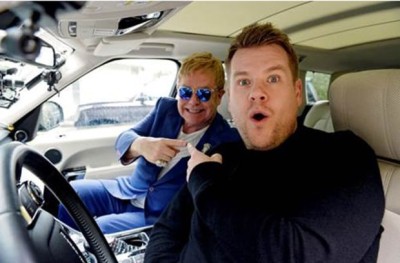 CBS is taking one The Late Late Show with James Corden’s best and driving into a primetime special.

The Late Late Show Carpool Karaoke Primetime Special will feature a new segmoent with Jennifer Lopez – and Corden’s favorite moments from his rookie season on The Late Late Show. (Can you say pilot?)

CBS will present THE LATE LATE SHOW CARPOOL KARAOKE PRIMETIME SPECIAL, featuring an all new Carpool Karaoke with global superstar Jennifer Lopez as well as highlights from past segments, plus James Corden’s favorite moments from his first year as host of THE LATE LATE SHOW. The special will be broadcast Tuesday, March 29 (10:00-11:00 PM, ET/PT) on the CBS Television Network.

“I have loved every minute of hosting THE LATE LATE SHOW. It’s been an incredible year,” said James Corden. “I look forward to this hour on primetime to look at some of my favorite moments and share a couple of great new ones. I can’t wait!”

“We are so excited to be doing this show in primetime on CBS,” said Ben Winston, Executive Producer of THE LATE LATE SHOW with JAMES CORDEN. “It has been the most wonderful first year on air, and to celebrate the season this way is really special. The show will include a mix of fun new moments and some of our favorite bits from this past year.”

“We’re thrilled with the opportunity to introduce a primetime audience to some of the fun we’re having every night after midnight,” added Rob Crabbe, Executive Producer of THE LATE LATE SHOW with JAMES CORDEN. “We can’t wait to share our big opening number and to see what James and Jennifer Lopez get into as they Carpool Karaoke to work.”

Each week night, THE LATE LATE SHOW with JAMES CORDEN throws the ultimate late night after party with a mix of celebrity guests, musical acts, games and sketches. THE LATE LATE SHOW’s post-Super Bowl broadcast delivered the highest ratings, with any host, since the show’s inception in 1995. THE LATE LATE SHOW with JAMES CORDEN has quickly become known for generating buzzworthy viral videos. The show holds the YouTube record for the most watched late night clip with “Adele Carpool Karaoke,” which has 84 million views. The show’s YouTube Channel has amassed more than 800 million total views and 3.9 million subscribers since the show’s premiere on March 23, 2015. In addition to its success on YouTube, The Late Late Show is the most social late night show in its time period and the second most social broadcast late night show, according to Nielsen Social.

Jennifer Lopez has been transforming the global music scene since her first album, On the 6, debuted in 1999 and she has sold more than 75 million records worldwide. She has had 16 top 10 hit songs and three #1 albums. She made history by being the first female artist to have a #1 movie and #1 album simultaneously. Currently, she appears on television in “Shades of Blue” and “American Idol,” and performs her ALL I HAVE residency at the Axis Theater in Planet Hollywood in Las Vegas.

THE LATE LATE SHOW with JAMES CORDEN airs weeknights (12:37-1:37 AM, ET/PT) following broadcasts of the THE LATE SHOW with STEPHEN COLBERT on CBS. Ben Winston and Rob Crabbe are the executive producers.