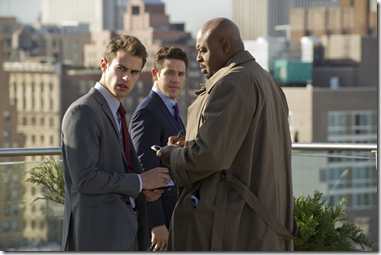 Rules of Engagement Returns with its Seventh Season Premiere on

The Season Finale of CSI: NY to be Broadcast Friday, Feb.22

CBS announced mid-season premiere dates for the new drama GOLDEN BOY and the seventh season return of the comedy RULES OF ENGAGEMENT.

The Network also announced the premiere dates of the spring editions of SURVIVOR and THE AMAZING RACE and the season finale of CSI: NY.

As the halfway point of the season approaches, CBS is once again America’s most-watched network, leading second-place ABC by +2.55 million viewers. The Network has eight of the top 10 scripted series including NCIS, the top drama, and THE BIG BANG THEORY, the #1 comedy in both viewers and adults 18-49.

GOLDEN BOY is about the meteoric rise of an ambitious cop (Theo James) who becomes the youngest police commissioner in the history of New York City. The series explores the high personal and professional cost he pays to achieve it as he is mentored by his partner, an experienced veteran detective (Chi McBride).