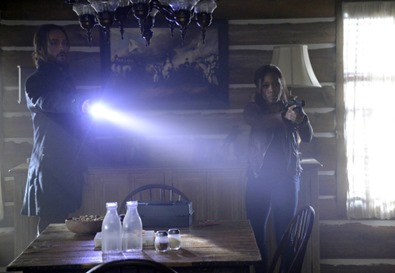 In an extremely clever movie, Fox has designated this week as Sleepy Holloween Week and is giving viewers who might not have caught up with its supernaturally entertaining hit series, Sleepy Hollow (Mondays, 9/8C), an opportunity to both catch up and max out on the chills and thrills this brilliant, ‘one molecule short of absurd’* show has to offer.

Between now and the next new episode of Sleepy Hollow, you can watch the first five episodes online and on demand on participating cable and telco providers. Then you’ll be up to speed for November 4th’s new episode, Sin Eaters – which guest stars Fringe’s John Noble. Check out the press release, after the jump.

SCARE YOURSELF THIS SLEEPY HOLLOWeen WEEK AND CATCH UP ON TELEVISION’S SPOOKIEST HIT, “SLEEPY HOLLOW”

Go Back in Time and Watch SLEEPY HOLLOW From the Beginning, Online and On Demand, Before the Series Returns with All-New Episodes Beginning Monday, November 4, on FOX

Before the next all-new episode returns on Monday, Nov. 4 (9:00-10:00 PM ET/PT) on FOX, and for this week only, fans may indulge in some television trick-or-treating by watch all episodes of the hit fantasy-adventure series on the FOX NOW app, FOX.com, Hulu and participating TV provider sites. The episodes will also be available for viewing on FOX On Demand for customers of AT&T U-Verse, Cox, Mediacom, Verizon FiOS, Time Warner Cable, XFINITY, Cablevision, Charter, Suddenlink, Bright House Networks, Cable One and many more. 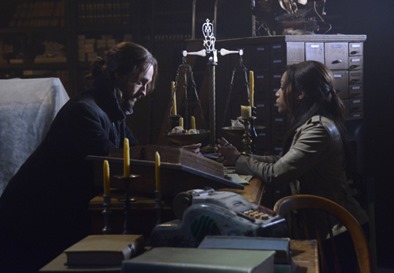 Episodes available for viewing include the “Pilot,” “Blood Moon,” “For the Triumph of Evil,” “For the Lesser Key of Solomon” and “John Doe.”

In the next all-new episode of SLEEPY HOLLOW, “Sin Eaters,” airing on Monday, Nov. 4 (9:00-10:00 PM ET/PT), Ichabod Crane (Tom Mison) goes missing, and his wife, Katrina (Katia Winter), appears to Lt. Abbie Mills (Nicole Beharie) in a vision, warning her that the Headless Horseman will return to Sleepy Hollow by nightfall. A frantic Abbie seeks help from the mysterious Henry Parrish (guest star John Noble, “Fringe”) in order to rescue Ichabod. Meanwhile, an encounter from Ichabod’s past weighs heavily on him, and details from Ichabod and Katrina’s first encounter are revealed.

To learn how to download the FOX NOW app for your selected connected device, visit http://www.fox.com/foxnow/. For additional information about SLEEPY HOLLOW please visit www.fox.com/sleepyhollow.

SLEEPY HOLLOW is a thrilling mystery-adventure drama series spanning two and a half centuries, in which a resurrected Ichabod Crane (Mison) pairs up with a present-day police lieutenant (Beharie) to save the enigmatic town of Sleepy Hollow – and the world – from unprecedented evil.

Photos by Brownie Harris/Courtesy of Fox