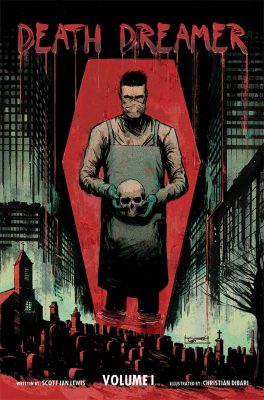 San Diego, CA, June 11, 2018: Dealing in death isn’t an easy business, but for the multi-talented and tormented Scott Ian Lewis, death is life. Having spent the past 13 years as vocalist for the reigning death metal band, Carnifex, Lewis has is ready to deliver a dark and brilliant new creative chapter with his debut graphic novel, Death Dreamer.

“Death Dreamer is a world that’s lived in my head for years. First existing on that page as a television script and now it’s grown into a graphic novel brought to life by an incredibly talented team of artists,” remarked author Scott Ian Lewis. “Christian, Simon, Taylor, and Chris have really elevated the characters in a truly amazing way. This book has been created completely independently, from writing the script on tour buses in eastern Europe to finding our amazing artist’s through Twitter.”

The Death Dreamer crowdfunding campaign will run full force for 38 days (June 11 – July 18) up to San Diego Comic-Con, where Lewis is set to premiere the finished graphic novel with a slew of signings. Fans who partake in the crowdfunding campaign will have the chance to pick up their signed edition in person all weekend long. For backers not able to attend SDCC, fulfillment will happen the same week.

“Releasing the first edition directly in the hands of the fans that have supported me is something I couldn’t be more excited for. There is a lot of me in this story and throughout the characters. My hope is you connect with them in a way that pulls you deep into the dark world of Death Dreamer,” added Lewis.

Amazing rewards are waiting for the campaign backers at IndieGoGo, ranging from the signed Death Dreamer graphic novel, a Death Dreamer T-shirt, flag or poster to a custom Death Dreamer evidence bag filled with a patch, a pen from the mortuary and a toe tag.

Nightowl Studios is handling editorial and design for Death Dreamer.

About Scott Ian Lewis
Equal parts tortured writer and passionate musician, Scott Ian Lewis is a founding member of the American death metal band, Carnifex. With six full-length studio albums, 200,000 worldwide album sales and 13 years of endless touring filled with blood, sweat, and tears, Lewis has seen the world and the horrors within it. Death Dreamer is his first graphic novel. Born and raised in Southern California, Lewis continues to live and die there with his wife.