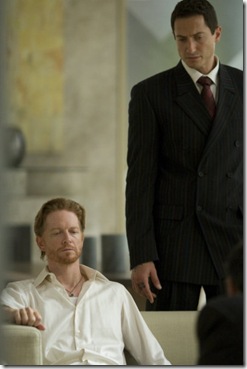 As the second part of Caprica’s first season [finally] begins, Daniel Greystone [Eric Stoltz] has drunken himself out of his position at the head of his own company – replaced by Tomas Vergis [John Pyper-Ferguson]; Joseph Adama [Esai Morales] has determined to find his daughter’s avatar in V-World – to the exclusion of his entire life in the real world; Barnabas [James Marsters] is preparing to take final action against Sister Clarice [Polly Walker]; Philomon [Alex Arsenault] is meeting Zoe [Alessandra Torresani] in cyberspace – under the illusion that she is a fellow scientist named Rachel, and Lucy [Magda Apanowicz] has committed herself to doing whatever it takes to get Zoe – in the Cylon-prototype’s body – to Gemenon.

So, yeah, after enough time that season 1.5 might as well be season 2, things are just as complex as they were when Caprica went on hiatus. 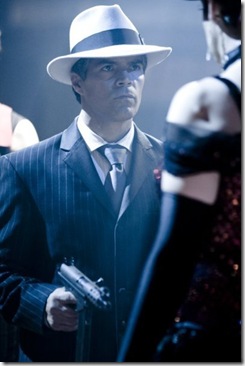 In Unvanquished, things pick up at a torrid pace. In short order we’ve got a failed bombing; met the Blessed Mother [Meg Tilly] who heads the monotheists’ church; seen Barnabas test Lucy’s resolve with a terrifying demand; followed Daniel as he makes a deal with the [metaphorical] devil, and watched Philomon discover that looks matter [at least to him]. And we haven’t even gotten to Joseph’s adventures in V-World!

When I reviewed the premiere of the series, I gave Caprica a C+ because, even though it had a lot of potential, it seemed unfocused and too ambitious for its own good. Since then, the series has evolved into an entertaining sci-fi soap opera with well-developed characters, unusual and complex situations and some stunning genre moments.

Unvanquished takes up the story some time after the events of the mid-season finale, End of the Line, and ramps up the stakes and the pace to another level. Ryan Mottesheard’s script adds character flourishes as he sets up arcs that will play out over the second half of the season but never seems stagy, or contrived. Stoltz directs with some muscle – action sequences have the proper degree of urgency, but character moments weigh as heavily [or lightly, depending…].

With its tenth episode, Caprica continues to grow and evolve in intriguing ways – and with considerable pace. Unvanquished makes for an engrossing hour of television.