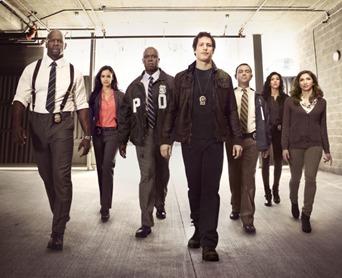 It’s been decades since a successful half-hour comedy mined the police procedural genre, but Brooklyn Nine-Nine (Fox, Tuesdays, 8:30/7:30C) aims to be the first hit cop comedy since Barney Miller and its premiere suggests that it just might have a chance.

Jake Peralta (Andy Samberg) is the best detective in Brooklyn’s 99th precinct but he’s also the most immature cop in the known universe. When the 99 gets a by-the-book new captain – in the form of the out and proud Ray Holt (Andre Braugher) – Peralta just might have to grow up.

The premiere focuses primarily on Peralta, Holt and Santiago but each of the others gets a few moments to establish their place in the show’s pecking order: Boyle has a crush on Diaz, who finds him sweet but not date material; Jeffords is on administrative leave – since the birth of his twin daughters (Cagney and Lacey), he’s lost his nerve in the field; Linetti knows a lot but doesn’t quite know how to handle the new captain.

Peralta and Santiago have a bet on who will get the most arrests over the next year – with some pretty serious stakes – and we get to see them in action. They are both very good at their jobs, but Peralta has a bad case of Peter Pan syndrome while Santiago wants a quick rise to captain of her own command.

Holt is smart, together and determined to make the 99th the best precinct in Brooklyn – and he will do that if he has to roll over Peralta to do it. 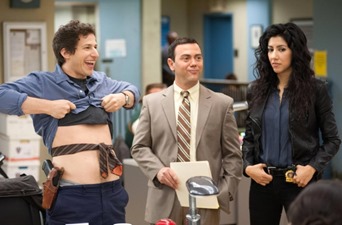 The key plot point of the premiere is Holt’s determination to get Peralta to wear a tie. When Peralta asks why, he is told to figure it out. Nabbing some thieves and a murderer are the devices series creators and writers of the premiere use to show that Peralta is good at his job; the tie is the device that shows Peralta what Holt wants – and expects – from his detectives.

The purpose of a pilot is to show a network what a show is supposed to be. It sets up the premise, introduces the characters and shows them in their specific environment. For a comedy pilot – especially one with an ensemble – twenty-two minutes isn’t really enough to develop more than two or three characters beyond a simple overview. As a result, it’s very hard for a comedy pilot to get it right. Brooklyn Nine-Nine gets it right.

The sketched in details for the secondary characters – Jeffords, Boyle, Diaz and Linetti – are sufficient to give the impression that they are more than their brief featured moments. Part of that is the writing, but a lot of it is down to performance and chemistry. They are handled in such a way that there is room for them grow as the series progresses.

The series leads – Peralta, Holt and Santiago – feel very real; we see more sides of them, and they interact with each other convincingly. Braugher is impressive because, like Tommy Lee Jones, he can be funny by not being funny. He’s also a great straight man. Samberg is impressive because he can hit unexpected dramatic notes when he has to – and is willing to ground Peralta’s hijinx in a surreal kind of reality. Fumero gets to be the straight person to both Samberg and Braugher, but can deliver a line with the best of them.

As for the headlined question from Holt, I suspect that Peralta will have a different answer every time – in interviews, creators Schur and Goor said it will be an ongoing gag in the show. I can’t wait to see how it plays out in future episodes.

If Brooklyn Nine-Nine can continue to mix workplace comedy with in the field procedural – a difficult combination to get right – it has the potential to become a classic.

Photos by Eddy Chen/Courtesy of Fox