It’s actually not too hard to find books that chronicle the trials and tribulations of surviving some dreadful illness; in fact, bookstore shelves are well-populated in this regard. What is much harder to find are peeks into the thoughts and lives of the family whose loved one is facing such a challenge. What is it like to learn that the love of your life has very limited time left? What drives one to hope beyond hope that treatments can pull off a miracle? How can life be so unfair that it decides to take a child’s mother away? And how does one continue working and living through the ordeal and beyond? Especially when you’re an actor and you need to keep up with a grueling shooting schedule. 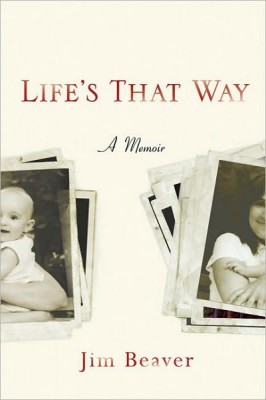 At first glance, I would think that I would not choose to torture myself with such a heartbreaking story that will further contribute to keeping Kleenex in business. After all, there are enough problems in the world right now and we often want to use television and books to escape from that arduous reality. But rather than being simply a sad book, this is one infused with hope, humor, courage, inspiration, and above all, love. Because out of despair comes hope. Out of experience comes knowledge. And at the end of it all is the indefatigable human spirit.  And I don’t care if that sounds cliched, it’s entirely applicable here.

“Life’s That Way” is exactly such a book. Written by beloved character actor Jim Beaver (Deadwood, Supernatural, Harper’s Island), the book serves as a memoir about the love of his life, wife Cecily Adams, who passed away from lung cancer in 2004 even though she was not a smoker. Cecily was the daughter of the original “Get Smart” actor, Don Adams, as well as an occasional guest on Star Trek: Deep Space Nine as the Ferengi wife of Quark. It is said that ‘when it rains, it pours’ and it was certainly pouring down on the Beaver family. It was six weeks after receiving news their daughter was autistic that Cecily’s devastating cancer diagnosis hit the family. Concurrently Jim’s father and brother-in-law were also fighting illnesses. In an effort to keep friends and family informed, Jim would write a nightly email. And through the magic of instant sharing that the internet provides, soon there were about 4000 people from around the world reading the updates. Those emails, which chronicle the entire process and continued for about a year after the initial diagnosis, became the basis for this book.

Whether you are someone facing a similar situation in your family and looking for some comfort, or you are a curious casual reader looking for some rare inspiration, both can find common ground here. You will laugh and you will cry as you follow Jim through the sadness and grief, to being able to live life again. Many prominent actors, directors, and authors have already been awed and inspired by Jim’s words and journey, so now it is your turn. The book is currently available at all major bookstores and more information can be found at: http://www.lifesthatway.com/

In the meantime, Jim can be seen as Bobby Singer on Supernatural, Thursdays at 9pm on The CW. A new episode airs this week, although his character returns to the screen next week. And he can also be seen as Sheriff Charlie Mills on Harper’s Island airing at 10pm Thursdays on CBS.

One thought on “Books: A Peek Into How “Life’s That Way””