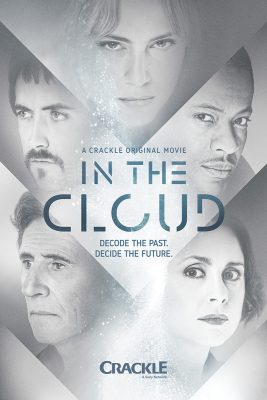 A city in the throes of terror because of a serial bomber looks to two radically different geniuses to find a way to probe the bomber’s memories to find the bombs that have yet to explode in Crackle’s new thriller In The Cloud.

In The Cloud will premiere on Crackle on February 8th.

Culver City, CA, January 10, 2018 – Crackle, a Sony Network, today announced a February 8th premiere for the high-octane, sci-fi thriller In the Cloud from Imperative Entertainment and Automatik. Ahead of the wide premiere, the full-length feature will be released on February 6th exclusively through the Crackle app on PlayStation®3, PlayStation®4, and PlayStation®Vita systems. The free ad-supported network also released the trailer, key art and first-look images for the movie, shot in London and Manchester, which stars (in alphabetical order) Nora Arnezeder (Safe House, The Words, “Mozart in the Jungle”), Gabriel Byrne (An L.A. Minute, Usual Suspects), Justin Chatwin (“Shameless,” War of the Worlds), Tomiwa Edun (“The Hour,” “Merlin,” “Bates Motel”) and Laura Fraser (“Breaking Bad”).

In the Cloud takes place in the near future after dozens of people are killed in attacks by a serial terrorist bomber. An exploration of the inevitable evolution of Virtual Reality and Artificial Intelligence, and the dramatic implications when it is used by those with questionable interests, In the Cloud tells the story of two estranged tech geniuses. Brought together by the mysterious death of their mentor, they overcome their differences to create a perfect cutting-edge technology with the goal of invading the terrorist’s memories using a VR environment to pinpoint the remaining bombs and prevent countless more casualties. But hiding in the shadows are those with secret agendas who seek to utilize the “memory cloud” to create and control what can only be described as a digital afterlife. In their race to thwart the attacks, our heroes will inadvertently create an AI so powerful it may change the very meaning of life and death for the future of humanity.