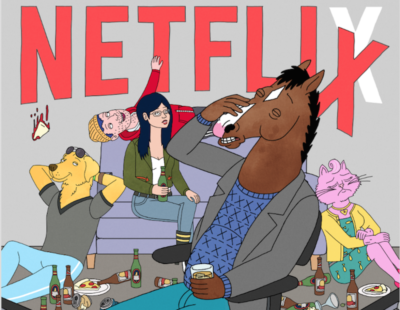 Quality will out – Netflix has ordered a sixth season of animated series BoJack Horseman. Check out the announcement notice below.

Check out the announcement here:

woooowwwwwwwwwwwwwww lets all forget about the fact that theres going to b a season 6 and focus on this inedible arrangement @netflix sent me just woww pic.twitter.com/7XJyE6Egsu

· Will Arnett voices BoJack, the failed legendary 90’s sitcom star from the favorite family sitcom “Horsin’ Around,” who has been trying to find his way through a muddle of self-loathing, whisky and failed relationships. Now, in the presence of his human sidekick Todd (Aaron Paul) and his feline agent and ex-paramour Princess Carolyn (Amy Sedaris), BoJack is primed for his comeback…

· Created by Raphael Bob-Waksberg. The series is Executive Produced by Raphael Bob-Waksberg, Steven A. Cohen and Noel Bright. Will Arnett (The Millers, Arrested
Development) and Aaron Paul (Breaking Bad) also serve as Executive Producers.
BoJack was designed by graphic artist Lisa Hanawalt and is animated by LA-based ShadowMachine. The show is a Tornante Production, brought to life by Michael Eisner’s The Tornante
Company.
· BoJack Horseman Season 5 premiered on Netflix on September 14, 2018.