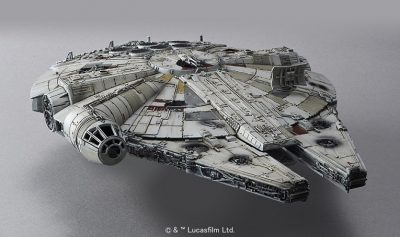 Manufactured in Japan by Bandai Hobby, the Star Wars Plastic Model line features notable vehicles from the classic Star Wars films as well as from Star Wars: The Force Awakens and Rogue One: A Star Wars Story. Originally available only for the Asian market, these official U.S. releases include English instructions and have product support provided by Bluefin.

Bandai Hobby is internationally renowned for its high-quality model kits that blend complex detail and innovative construction that builders of all skill levels will enjoy. A nipper or sprue cutter (sold separately) is highly recommended for assembly, but the following kits do not require glue.

The 1/72 X-Wing features opening and closing S-foils and a cockpit with 2 different canopy options. Death Star panel themed display stand can connect with stands from other vehicles to recreate the iconic Death Star Trench Run.  The exhaust of the trench and 2 proton torpedo effects are also included to recreate the Rebel victory in “Star Wars: A New Hope.” Kit includes seated pilot, part swappable landing gear options, and decals.

Darth Vader’s special Tie Fighter, known as the x1, features Bandai’s multi=material and color injection technologies.  The different components that make up its wings are molded together, yet remain color separated. Includes 2 different canopy types, a window version made of clear plastic, and also a frame version that can allow the seated Darth Vader to be seen more clearly. Set includes Death Star panel themed display base that can combined with other display stands from other Star Wars vehicles to create impressive battlefields. Set includes laser effects and 1/72 scale seated Darth Vader.

A highly iconic ship from the Star Wars universe, the TIE Fighter has been faithfully recreated in 1/72 as a plastic model kit utilizing Bandai trade mark color injection process. Set includes a dedicated display base that can connect with other display stands to build out battlefields. Set includes laser effect parts, 1/72 scale Pilot (seated) and decals.

From Star Wars: Episode V – The Empire Strikes Back, comes the AT-AT in 1/144 scale! The 4-legged mobile transport has stunning details even down to the side paneling. Recreate the memorable attack at the Battle of Hoth scene with multiple kits!  Legs feature individually movable joints that can even bend low enough to recreate the massive behemoth being defeated. Side panels can also be removed. Set includes seated pilot; decals; snow themed dedicated display base; laser effect parts; leg dampers; and articulated head, legs and laser guns.

From Star Wars: Episode IV – A New Hope, at the Battle of Yavin the Y-Wing Starfighter makes its debut in 1/72 scale! The detailing for this vehicle has been thoroughly adapted in scale and brings incredible realism. The inner cockpit and ion propulsion engine have been fine-tuned and the added Death Star motif display base increases quality of display. Set includes dedicated display base, laser effect part, 1/72 scale seated pilot, canopy parts (clear part/frame part), landing gear set, and water-transfer decals.

In Star Wars: Episode V – The Empire Strikes Back, bounty hunter Boba Fett’s vehicle, the Slave I makes its debut as a model kit! The detailing to the included display base mimics the scene of the arrival and departure of Boba Fett in Cloud City. Added wing cylinder parts lets you choose between either parked or flying display for the Slave I! Set includes dedicated display base, select-able path part for display base, 1/144 scale seated Boba Fett, 1/144 scale carbonized Han Solo, laser effect parts, hanger hatch open/close parts, wing cylinder part for parked/flying styles and water-transfer decals.