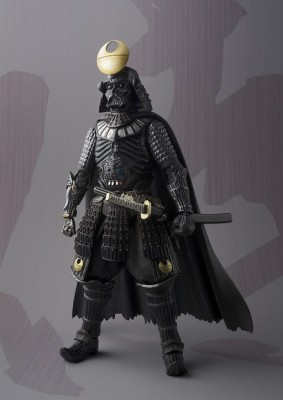 If you’re looking for something a little different – a little out of the ordinary – for your Star Wars collection, you should check out the new highly detailed, feudal-Japanese takes on popular Star Wars characters created by Tamashii Nations for the Meisho Movie Realization Star Wars line.

The Meisho Movie Realization Star Wars line pays homage to the Samurai aesthetic and artfully reimagines several Empire characters from the legendary films with feudal-style Japanese armor and weaponry. Each figure is exquisitely crafted by some of Japan’s top sculpting talent and constructed with hybrid materials featuring up to 15 points of articulation to create endless posing possibilities.

The newest addition to the Meisho Movie Realization Star Wars product line is the “Ronin” Boba Fett, which debuts in December and depicts the intergalactic bounty hunter as a “lordless” Samurai warrior via the sculpting talent of artists Takeyuki Takeya and Junichi Taniguchi. The “Daisho” Darth Vader depicts the Dark Sith Lord as a Samurai General clad in sinister black “Death Star” armor and will debut in January 2016. It will be followed in May 2016 by the imposing Akazonae Royal Guard, outfitted with a Japanese-style katana and pike and resplendent in beautiful crimson-robed armor. Pre-orders for these figures are available now.

Fans that want to dive into the Meisho Movie Realization Star Wars line immediately can select from a trio of figures – available now – that includes the “Ashigaru” Stormtrooper, and the Samurai General “Taisho” Darth Vader. Each is clad in a unique set of armor and comes with an array of weapons and other accessories. 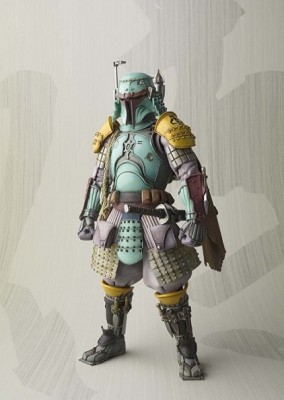 Everyone’s favorite bounty hunter goes medieval! Boba Fett joins the Meisho Movie realization series in a spectacular feudal Japan aesthetic, appropriately portrayed as a lord-less “Ronin” Samurai via the sculpting talent of artists Takeyuki Takeya and Junichi Taniguchi. In addition to his EE-3 rifle portrayed as an flint-lock style blaster, this deluxe figure set features an extensive array of accessories that includes a characteristic backpack missile that can be removed/attached, and a moveable helmet mounted scope. In addition to a short ninja-style katana and sheath, numerous ninja-style blade accessories that are also included can be subtly attached to shin and forearm area mounting points. 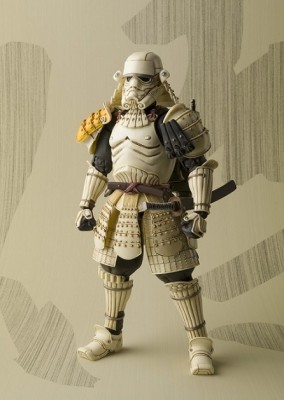 The third figure to join this unique series is the artillery packed Teppo Ashigaru Sandtrooper! The Sandtrooper version comes with two gun powder type rifles and a Japanese katana sword ready for battle. A special backpack is designed with meticulous detail and finished with a rusty patina look. Flexible material makes posing the Sandtrooper holding a firearm a breeze. The set includes three sets of interchangeable hands, blaster rifles (small and large), a Japanese katana set, and backpack. 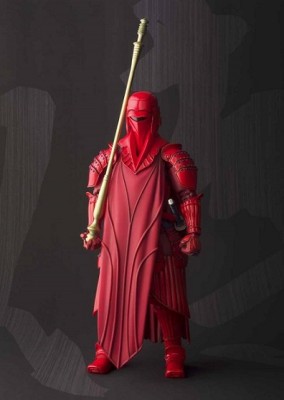 The imposing crimson-robed Akazonae Royal Guards are next to join the Samurai General’s side in this high-quality Japanese feudal take on the Star Wars legacy. The Akazonae Royal Guard comes wielding not only the iconic force pike-esque staff, but a traditional Japanese-style katana as well. The front robe pieces are removable, giving the option of displaying the Guard in a samurai armor fashion. For further nuanced posing, the Akazonae Royal Guard set also includes interchangeable hands. The unique use of “wa,” Japanese style also makes for a one of a kind sculpt design that fans cannot find anywhere else.

An exquisitely rendered figure of Darth Vader portrayed as a Japan feudal era Samurai General. A unique artistic interpretation master crafted by acclaimed artist Takeya Takayuki, this original stylized figure pays homage to the Japan aesthetic and film influences on Star Wars. Tamashii Nations’ Movie Realization brand takes the theme of movies and infuses that concept into high quality figures. And the secret ingredient? All figures have an added pinch of “wa” (Japanese style) that makes for a one and only, unique design – from the tip of his sharp lightsaber-turned-katana to the meticulously sculpted Samurai-esque armor. Look closely at Vader’s helmet and one will notice the Imperial insignia arranged in elaborate “wa” style. Set includes two interchangeable lightsaber parts and 3 sets of interchangeable hands perfect for posing the Samurai-styled Sith Lord as he manipulates the Force. 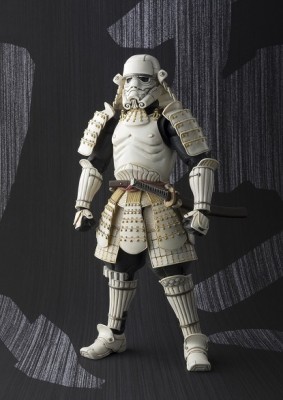 Based in Irvine, CA, Bluefin built its reputation as a leading distributor of Japanese toys, collectibles, novelty and hobby products. In recent years, Bluefin has grown to include a range of high quality collectible lines from the United States, Hong Kong, Taiwan and Singapore and established itself as the official North American consumer products and retail development partner for Studio Ghibli. Selling to thousands of specialty, chain and independent stores, Bluefin is an official North American distributor for Bandai Hobby, Kotobukiya and Capcom, is the sole provider of Bandai Tamashii Nations products, and is also the exclusive and official distributor for Hero Cross, Beast Kingdom, Comicave, Mr. Hobby, Groove’s Pullip dolls, SEN-TI-NEL and X-Plus. Bluefin also represents TruForce Collectibles products worldwide. Additional information is available at: www.bluefincorp.com.