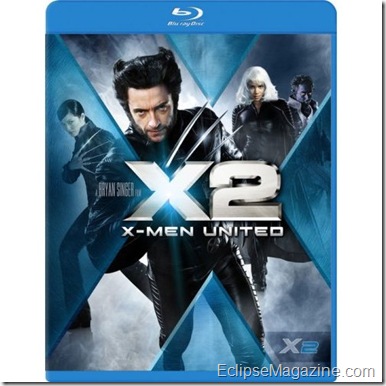 The Disk has subtitles in English, Spanish, Cantonese, Korean, Mandarin and Portuguese.  The audio is English 5.1 DTS-HD, English, French, Spanish and Portuguese 5.1 Dolby Digital, with a full commentary track from Director Bryan Singer and Cinematographer Tom Sigel. With a separate commentary with the Production Team: Producer Lauren Shuler Donner, Ralph Winter, Co-Writers Michael Dougherty, Dan Harris and Screenwriter David Hayter.  The menu navigation isn’t as bad as on most Fox Disks. I can actually easily get around and it’s not overly busy.

In addition to the commentary tracks it includes Marvel Universe Trailers for Wolverine, the other X-Men Movies, Daredevil and Fantastic Four and it includes BD-Live Functionality. The 2nd disk is where the package really shines it’s filled to the brim with hours of extra featurettes – all in 480p standard def.  There are features on everything from scoring the film to the make-up effects to fight choreography, Bryan Singer always puts a lot of love into the extra features on his films and it’s on display here. The only problem is, I think I’ve seen all of these on the regular X-Men United DVD.