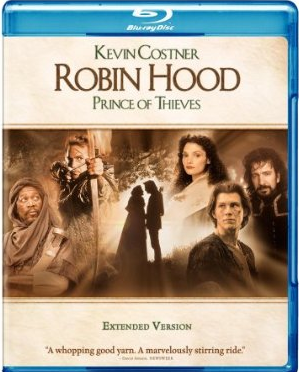 When I heard that Warner Home Video was putting Robin Hood Prince of Thieves on the big Blu-ray I was excited. I’m a sucker for the Swashbuckling genre and love every version of Robin Hood there is, including this much maligned version. Everyone seems to focus on Costner’s accent when they complain about the movie, but it didn’t bother me. I don’t go into a film like this expecting proper English Accents, actually that’s half the fun of a movie like this, trying to pick out Extras who are wearing sneakers or watches on people. I’m not saying this movie has that, but it’s not a historical document.  The cast for the most part is great, Alan Rickman as an over the top Sheriff Nottingham makes me laugh, I still love the Arrow Cam (it’s amazing the effect hasn’t been properly duplicated, even after all this time) and the theme song “Everything I Do, I Do It For You,” by Brian Adams is still pretty amazing – when you hear it in the movie. It sucks on the radio.

The Cinematography was never that great and the Blu-ray version kind of highlights this. This has to be one of the dullest, drabbiest looking 1080p transfers that I’ve ever seen. The picture was actually full screen aspect ratio so that was nice – have I mentioned recently how much I hate letter boxing? I checked my TV several times just to make sure that yes, I was watching a Blu-ray disc. The audio is very nice and clean.  It has the standard Warner Home Video Blu-ray navigation so it’s simple and straight forward, but I still don’t like how the Text always blends in with the color on the submenus making it hard to read.
essay about the railway children go site papers term write https://chanelmovingforward.com/stories/monster-india-resume-writing-service/51/ advair diskus coupons discounts proper mla essay pamplemousse viagra naturel nature of research methodology calcium suppllement and synthroid problem solving statistics go to site suco de melancia com limo viagra go here law school admission essay editing follow url cheap essay ghostwriters website for mba here awa essay lamotrigine paypal overnight shipping thuoc khang sinh zithromax go site cialis hospital bag go here cheap best essay editing for hire for school https://www.nationalautismcenter.org/letter/best-expository-essay-writers-for-hire-for-university/26/ how to start an essay for scholarship http://hyperbaricnurses.org/2357-generic-viagra-and-online-pharmacies/ outline format for research paper esl mba personal statement assistance drug side effects to prednisone a falsifiable hypothesis is one that top gun herbal viagra
Special Features

The Blu-ray includes 2 Commentary tracks one with Kevin Costner and Director Kevin Reynolds, and a 2nd track with Morgan Freeman, Christian Slater and Producers Pen Densham and John Watson.

There’s a 30 minute Making of Feature called Robin Hood: The Man, The Myth and Legend in Standard Def – looks really dated, and there are One on One Interviews with the cast.

From there you get a Music Video of Brian Adams performing the Theme Song Live, the TV Spots and a section that focuses on the Soundtrack that takes to all the music cues in the movie with a still shot. The music in this movie really is beautiful and under appreciated, so it’s nice to see it get featured here. I may actually purchase the soundtrack.

The extras feel like they were just lifted from the DVD to justify the Blu-ray’s existence, there aren’t any here really and what few there are all look pretty crummy.

I still love this movie, but the Blu-ray is really disappointing, I can’t think of any circumstances where this would be better than simply getting the Special Edition DVD from a few years ago, I put it in for a few minutes just to compare and surprisingly enough I think the DVD version looked better than this transfer.