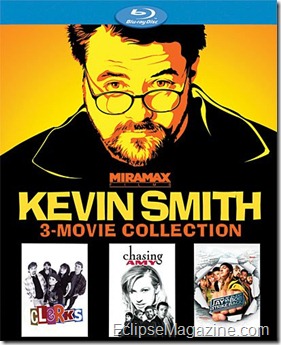 When the Kevin Smith Blu-ray boxed set was announced, my first reaction was why? I mean Kevin Smith films aren’t known for their directorial flourish and they certainly didn’t win any awards for cinematography excellence. Kevin Smith’s claim to fame is his story telling abilities and his great ear for dialogue – which let’s face it, as he says consists of "fart jokes." This Blu-ray collection includes his 3 most well know films Clerks, Chasing Amy and Jay and Silent Bob Strikes back. Each disk is packed to the gills with features.

This includes a restored version of the original black and white movie that started it all for Kevin. It includes the original cut (where Dante dies in the end) and the theatrical version. This was the movie that I had the most concerns about, I mean really the original movie looks like garbage or DVD. This hi-def transfer breathes new life into the picture. It’s really sharp and clear now. Yes there’s a lot of grain, but I’d rather have that then the fuzziness from before. This is the definitive version of Clerks to get.

I’ll admit it, I’ve never been a fan of Clerks. I always thought it looked ugly and was barely watchable and it’s just too damn talky with nothing really happening. I honestly don’t care about Randal and Dante. But this new transfer has changed my mind, now that I can actually see what’s going on, I appreciate it a bit more. I really dislike the menu navigation with all the sub menus, and the audio is decent but sort of bland. But here’s the scam while it’s packed with extras, including two 90 minute documentaries, this is the same material that was on the Clerks X disc that I already own. If you don’t already own Clerks this is the definitive version to get.

Chasing Amy is Kevin Smith’s most accomplished and full movie to date. It’s amazing how well this movie continues to hold up through the years. The transfer is nice and clean, but it’s not one that’s going to make you go wow.

The 3rd installment in the Jay and Silent Bob "Trilogy" is the funniest. I bust a gut the first time I saw this movie several years ago. It’s best to watch this movie drunk.

Most Box Sets will give you the bare bones edition of the various films and then throw everything onto a special Bonus Disk. This set is different; each single disk is packed to the gills with features. The only problem is 90 percent of the features on each film were already on the DVD version. As I said up front, Kevin Smith films aren’t something you "need" to see in High Def (except Clerks). This is a nice package and "intro" to Kevin’s world. Although there’s a gaping hole in the collection and that’s Mallrats. Where’s Mallrats? This set Collection is for people who don’t already own the DVD versions of these movies. If you don’t already own any of these films then why are you reading this?