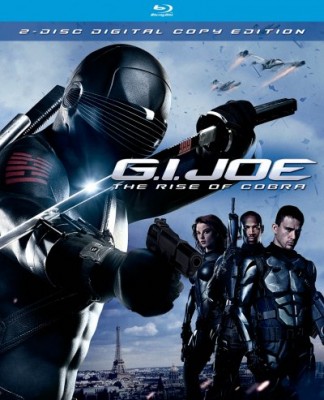 I don’t know what the folks at Paramount are doing these days. First they wouldn’t screen GI Joe: Rise of Cobra for critics during it’s summer run, now they’ve taken it a step further by not sending out review copies of the DVD/Blu-ray to critics – and why should they? The movie still went on to make huge amounts of money for the studio and you can bet the Blu-ray/DVD will do gangbuster business as well.  After watching the Netflixing the G.I. Joe, Blu-ray I can understand why they wouldn’t send out the Blu-ray/DVD.  This is one crummy, half-baked Blu-ray release.

Let’s start by saying I like the movie a lot, I think it gets the essence of G.I. Joe mostly right. At it’s heart it’s an origin story about the birth of Cobra and Duke joining the Joes. So we’re not going to get a lot of the cool cartoon moments. I thought it balanced the action and the “seriousness,” about right. Marlon Wayans as Ripcord was surprisingly good, Channing Tatum was terrible as Duke, the man can’t act. But in a movie like this you don’t have to be all that good to pull it off. I loved the ending with the Cobra Commander reveal and Destro makeover.  The Zartan (Arnold Vosloo) ending was really stupid but a good setup for the inevitable sequel. The CGI and the sequence with the super suits looked like they were directed by someone who has never worked with special effects before.

Considering this is one of Paramount’s tent pole movies this year the way they treated this Blu-ray release is criminal.  It used to be that packaging a Blu-ray release as a Two-Disc Special Edition with Digital Copy meant something. It tells the buyer that yeah this is going to be a feature packed set and that you’ll get 2 disc of movie material and a 3rd disc that’s for Digital Copy purposes.  But no, Paramount screws you here.  Disc one contains nothing but the Movie and some trailers for upcoming Blu-rays.  The only feature on Disc 1 is a commentary track by director Stephen Sommers.  Disc two (which I didn’t have for review) contains the Digital Copy and a whopping 2 featurettes – which must be in Standard Definition since Digital Copy discs are always on regular DVD.  Why the heck would you put extra features on a Digital Copy disc? Don’t tell me there wasn’t enough space on Disc 1 for your 2 “huge” featurettes.

The picture quality of this Blu-ray is “terrible,” don’t get me wrong is sharp and clear, but it didn’t look much better than an upscaled DVD. That’s partly due to its pedestrian cinematography but also the transfer itself.  Audio is in 5.1 DTS HD Master so it’s pretty nice but the audio mix in the movie doesn’t really make you go wow, and it isn’t like the film has a decent, memorable soundtrack.  There’s also French and Spanish available in 5.1 Dolby Digital.  Subtitles are in English, Spanish and French.

I’m surprised I managed to come up with 600 words about one of the most disappointing Blu-ray releases of 2009. Once Paramount told me I wasn’t going to get a review copy, this was going to be a day one purchase for me, I’m glad I Netflixed it first. The movie is worth a viewing so rent it, but boycott this Blu-ray release. It’s terrible, if you must own it get the DVD version.