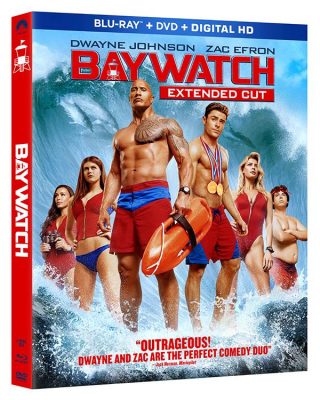 Maybe it was just the mood I had going into Baywatch (looking for a laugh or two after a day of packing up to move), but I quite enjoyed it.

The question is, would I feel the same way about the movie without an audience, in my living room? The answer is yes.

I only ever watched a couple episodes of the TV series, but the movie seemed to hit every one of the major parts of the show – slo-mo Baywatch babe; overly earnest Mitch Buchanan; plucky comic relief (who’s so quick to melt down when his crush is around that he doesn’t realize that she’s into him from the beginning); totally inappropriate investigation of suspected criminal activity; lots and lots of beautiful beach people.

Baywatch opens by introducing us to Mitch Buchanan (Dwayne Johnson), a laid back dude who seems to know everyone on his beach – brief exchanges with each tell us he is loved and respected by all (or almost all).

Brody is a cocky, lazy, preening jackass (at first, of course), but he is fit (pound for pound, pretty much Johnson/Mitch’s equal). Unfortunately, his first rescue attempt showcases his ego and his total obliviousness to the practicalities of the job he’s supposed to be doing.

Meanwhile, Ronnie (Jon Bass, Big Time in Hollywood, FL) is ready to try out (again) to make the Baywatch team, but suffers a penile mishap in an unfortunate encounter with a beach chair. It’s Ronnie who turns into such a babbling idiot whenever CJ (Kelly Rohrbach, The PET Squad Files) is around that he completely misses that she’s actually into him. Good thing he’s also a first-rate tech guy…

The criminal activity is provided by Victoria Leeds (Priyanka Chopra, Quantico) who is distributing drugs to drive property values down so she can turn the public beach into a condos site.

Chopra plays her with a silken evilness that her responding to an accusation with, ‘I’m not a Bond villain… yet!’ Maybe she should be a Bond villain…

Rohrbach is sweet and a bit tangy as CJ – she’s good at her job and smart enough to see that Ronnie is a catch despite not being movie star handsome.

Bass plays Ronnie’s various levels of incompetence/competence with a verve that’s definitely praiseworthy. When he realises that CJ is into him, he doesn’t suddenly become the macho guy, he figures he’s experiencing a miracle and goes for it.

When I watched the trailers, I thought Baywatch was going to be a hard-edged comedy with a lot of gross out gags. While there are a few gross out gags (some genuinely cringeworthy), the movie isn’t quite as funny as I was expecting – instead, it played out with an unexpected amount of drama and serious action.

Outside of Brody’s botched first rescue attempt, the film takes its lifeguards’ work seriously – treating those sequences with respect (when Mitch bails out Brody on that first effort, the Baywatch team’s rescues are played straight – right through to when Mitch tears a strip off Brody for his woefully inept grandstanding).

There’s a recurring bit with Mitch attempting to persuade police Sergeant Ellerbee (Yahya Abdul-Mateen II, The Get Down) that there’s something bad going down on the beach, but Ellerbee is too busy pointing out that Mitch’s team are not cops and he is not to pay any attention. This bit works the first couple times and then gets old.

Another recurring bit has Mitch calling Brody by names of boy bands and toys. This one works well and has a great payoff – especially since Mitch has help humbling Brody by Summer (a very deft Alexandra Daddario, True Detective, the Percy Jackson movies).

The extra five minutes of material on the Extended Cut neither improve or lessen the film (but the deleted and extended scenes that are part of the extras definitely would not have helped).

There are six writers credited with story and screenplay, so it’s probably a miracle that Baywatch is as much fun as it is.

Directed by Seth Gordon (Horrible Bosses), Baywatch is fairly fast paced, though its top speed is more of a lumbering down a hill than a drug-running speedboat fleeing the cops.

It’s really the commitment of the cast; their chemistry, and a willingness to play with the line between comedy and drama that made Baywatch work for me.

The features on the Baywatch Blu-ray are a set of four featurettes that amount to extended epks. They’re reasonably informative but not terribly insightful.