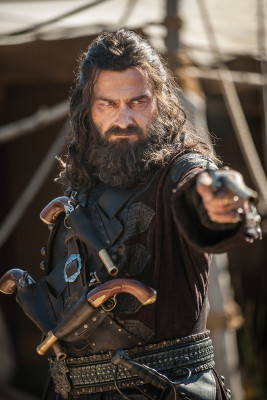 Beverly Hills, Calif., March 24, 2015 – Starz announced today the casting of Ray Stevenson (“Rome,” Divergent), as the iconic pirate ‘Blackbeard,’ also known as ‘Edward Teach,’ on the Emmy®-winning Original series “Black Sails.” One of the most notorious pirates to have ever lived, ‘Edward Teach’ (‘Blackbeard’) returns to settle some unfinished business, but a great deal has changed during his absence, and he will have to disrupt cemented alliances and challenge new ones to achieve the impossible.

Ray Stevenson is best known for his critically and publicly acclaimed portrayal of the legionary ‘Titus Pollo’ in the HBO/BBC television series “Rome,” and also appeared as ‘Isaak Sirko’ in the critically acclaimed Showtime series “Dexter.” Stevenson appeared in the 2014 blockbuster Divergent, and will reprise the role of ‘Marcus Eaton’ in the 2015 follow-up film, Insurgent.  Additional film credits include starring as ‘Volstag’ opposite Chris Hemsworth and Natalie Portman in the Marvel Comics’ blockbuster Thor, opposite Denzel Washington and Gary Oldman in the post-apocalyptic The Book of Eli, as ‘Frank Castle’ in The Punisher WarZone for Lionsgate/Marvel, as ‘Dagonet’ in King Arthur, as ‘Danny Green’ in Kill the Irishman with Christopher Walken, and in Billy Bob Thornton’s dramatic comedy Jayne Mansfield’s Car.