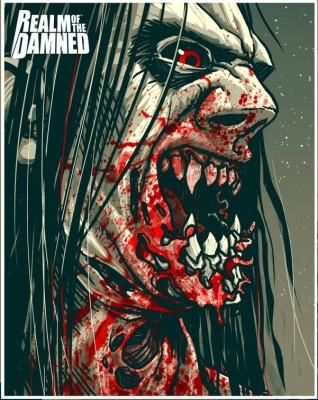 Realm of the Damned: Tenebris Deos is the kind of dark, subversive series that one could see fitting into the 2000 AD universe.

Following the destruction of the supernatural defense force known as The Congregation, the sole surviving monster hunter – the legendary Alberic Van Helsing – is recruited by the Vampire elite to destroy an epic evil that is capable of destroying them all.

The eight-episode series Realm of the Damned: Tenebris Deos will debut in Judge Dredd Megazine #369, in stores on February 17th. Follow the jump for further details. 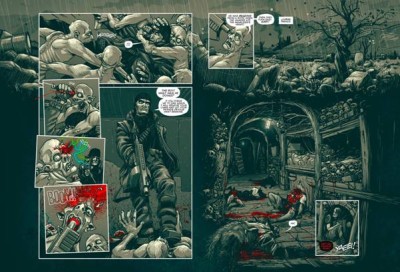 The world will not end with a bang, but rather with a vicious chord – The Realm of the Damned: Tenebris Deos is coming to the Judge Dredd Megazine!

The new Black Metal-infused gothic horror series, written by Alec Worley and drawn by Simon “Pye” Parr, will begin in the slot of the monthly anthology magazine in January.

The Megazine has established a reputation for premiering stunning new series outside of the world of 2000 AD and Judge Dredd, including Andy Diggle and Jock’s SNAPSHOT, Paul Grist’s DEMON NIC, Rob Williams and D’Israeli on ORDINARY, and Alan Martin and Rufus Dayglo on TANK GIRL.

This new series blends music and madness into a world where the forces of darkness that once stalked the fringes of reality have finally taken over the world.

The supernatural defence agency known as ‘The Congregation’, a covert wing of the Catholic Church, has been destroyed and its sole surviving operative, legendary monster-hunter Alberic Van Helsing, is now a fugitive and addict. Now he’s been recruited by the so-called Vampire Elite to help them destroy an ancient evil that threatens them all.

The eight-part series will be a hit with all fans of the horror genre as well as legions of heavy metal fans, and is another strong new series for the Megazine. With Parr’s gruesome and gory visuals and Worley’s in-your-face script, Realm of the Damned is the comic your mother warned you about!

Realm of the Damned will debut in the Judge Dredd Megazine #369 on 17TH February 2016. Available from all good comic book stores worldwide and newsagents in the UK, as well as digitally from 2000 AD’s webshop and apps.

“Pye’s artwork is phenomenal,” said writer Alec Worley. “Every spread I’m seeing is more amazingly demented than the last. This is going to be one hell of a debut graphic novel. Readers of the Prog and Meg have only had a taste of what this droid can do. Now they’re in for a feast!”