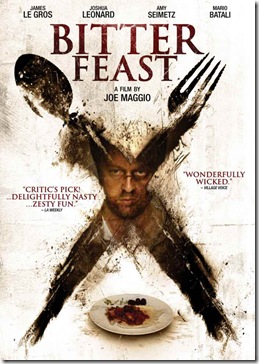 When a food blogger’s review – coupled with his own pretentiousness and arrogance – bring Chef Peter Grey’s world crashing down around him, he plots a foodie’s vengeance. Bitter Feast hovers somewhere between a standard vengeance flick and a psychological horror movie.

With nothing really drawing me to theaters these last few weeks, the arrival of the bitter Feast DVD was welcome indeed. The film had garnered a lot of praise from both the horror and food press. Such an overlap intrigued me, so I rustled up some unhealthy snacks, cracked open a frosty cola [diet, of course, to offset the snacks] and settled in…

An opening flashback to two brothers playing a scary game seems to come out of nowhere, but its connection to Peter Grey [James LeGros] does, in fact, shed light on why, when he goes over the edge on food blogger J.T. Franks [Joshua Leonard], things take on a decidedly crazed edge. [It should be noted that Franks is in a pretty dark place, too – he’s lost a son to cancer and his marriage is best described as shaky.]

Why Grey goes to such lengths is explained by his world falling apart in one day – his cooking show’s ratings have sunk so low the show is being cancelled; the Franks review of the restaurant where he is chef, Feast, has caused a precipitous drop in business and, that coupled with the loss of his cooking show, results in his losing his job. So, he ambushes Franks and hauls him to Grey’s isolated country home [‘It may not be the middle of nowhere, but it’s pretty close’], where Franks’ screams and cries for help will go unheard.

The catch to Grey’s simple challenges is that whenever Franks fails, there’s a nasty punishment in store. Before long, the film evolves into a duel between Grey and Franks – and when Franks is given an option that will result in his death, Grey refuses to even let him take that out. Then he comes up with an idea that gives Franks reason to live…

Another obstacle to Grey’s revenge comes in the form of Bill Coley [producer Larry Fessenden] – a private eye who thinks it possible that Grey might be involved in Franks’ disappearance.

Written and directed by Joe Maggio, Bitter Feast is a kind of like a food channel version of The Most Dangerous Game. It’s smart and knowing – great care was taken to get the food right [and it looks amazing!], and very nicely paced for maximum dramatic impact. The film is given an extra sense of verisimilitude through a small, but well placed cameo by Mario Batali.

There are fewer jump moments than you might expect, but the pacing and music set a lovely tone of dread – and Maggio doesn’t make things easy for the audience visually, either. There are more than enough bright daylight scenes to create a nice contrast to the night scenes and the darker daytime scenes in the forest around Grey’s home.