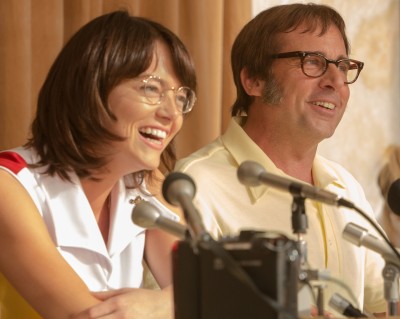 Battle of the Sexes – the story of the legendary tennis match between tennis hustler Bobby Riggs and World number one Billie Jean King – has begun production.

Riggs, a former champion, declared that he could whip King – the current women’s #1 ranked player. The match sparked immense interest and became the single most watched sports event of all time.

Emma Stone stars as King, while Riggs is played by Steve Carell. The film is written by Simon Beaufoy and is being directed by Jonathan Dayton and Valerie Faris. For further details on the story behind the film, follow the jump. 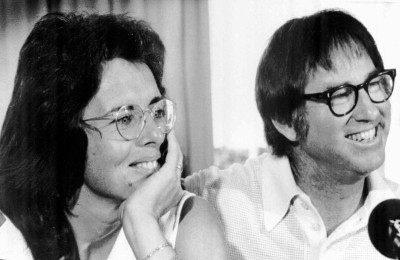 Directors Jonathan Dayton and Valerie Faris, creators of the Oscar-winning LITTLE MISS SUNSHINE and indie favorite RUBY SPARKS, have turned their attention to a period in 1970’s America that presaged a cultural tsunami.

The electrifying 1973 tennis match between World number one Billie Jean King (Emma Stone) and ex-champ and serial hustler Bobby Riggs (Steve Carell) was billed as the BATTLE OF THE SEXES and became the most watched televised sports event of all time.  The match caught the zeitgeist and sparked a global conversation on gender equality, spurring on the feminist movement. Trapped in the media glare, King and Riggs were on opposites sides of a binary argument, but off-court each was fighting more personal and complex battles. With a supportive husband urging her to fight the Establishment for equal pay, the fiercely private King was also struggling to come to terms with her own sexuality, while Riggs gambled his legacy and reputation in a bid to relive the glories of his past. Together, Billie and Bobby served up a cultural spectacle that resonated far beyond the tennis courts and animated the discussions between men and women in bedrooms and boardrooms around the world.

The film is being produced by Cloud Eight Films’ Christian Colson and Decibel Films’ Danny Boyle, along with Robert Graf, with a screenplay by Academy Award-winning Simon Beaufoy (SLUMDOG MILLIONAIRE, 127 HOURS, THE FULL MONTY). Boyle and Colson are the team behind Academy Award-winning and nominated films such as SLUMDOG MILLIONAIRE, 127 HOURS and STEVE JOBS. Producer Robert Graf previously collaborated with the directors on RUBY SPARKS and worked on such projects such as HAIL, CAESAR! and NO COUNTRY FOR OLD MEN.

“If all men and women worked as well together as Jon Dayton and Valerie Faris,” said Boyle and Colson, “the world would be a more harmonious place. Together with Emma, Steve and the rest of our fabulous cast they are the perfect team to realise Simon Beaufoy’s brilliant ballad of Billie and Bobby–the perfect odd couple.”

“The irony isn’t lost on us that we are a husband-and-wife team directing the Battle of the Sexes.  As soon as we read Simon’s script we knew we had to make this film. We feel so fortunate to have gathered such an amazing group of artists, both behind and in front of camera,” said Jonathan Dayton and Valerie Faris.

“Jon and Val have been a part of the Searchlight family since their debut with LITTLE MISS SUNSHINE,” said Utley and Gilula. “Their ability to create real, believable characters and situations while also subtly commenting on culture is unique, and we can’t wait to see their take on this watershed moment in sports history and social change. We are proud to be reuniting with them, along with Steve, Emma, Danny and Christian, all of whom are family to us.”

“I’m extremely pleased to be working again with Jonathan and Valerie as well as with Christian and Danny whose work I have long admired,” said Robert Graf. “I remember watching the original Battle of the Sexes in 1973 and, even as a boy, recognizing it as both an irresistible pop spectacle and part of an important cultural conversation about equality and respect — a conversation that continues vigorously today and to which we hope our film will contribute.”

Joining Dayton and Faris on the film is longtime collaborator Pamela Martin who edited both LITTLE MISS SUNSHINE and RUBY SPARKS and who received an Oscar nomination for her work on THE FIGHTER.  New to the team are director of photography Linus Sandgren, known for his cinematography on Joy and American Hustle; Oscar and BAFTA nominated production designer Judy Becker (AMERICAN HUSTLE, CAROL); and Oscar Award-winning costume designer Mary Zophres (TRUE GRIT, CATCH ME IF YOU CAN).