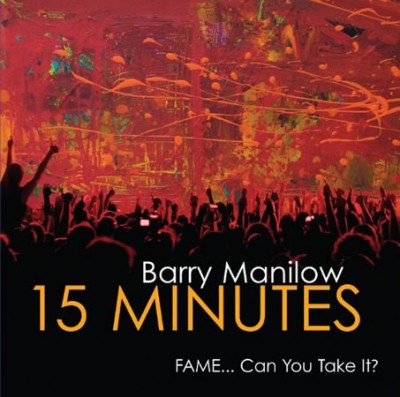 15 Minutes, the first original album from singer-songwriter Barry Manilow in 10 years, is set to be released on June 14th.

Manilow is releasing 15 Minutes through the independent label STILETTO Entertainment and in partnership with FONTANA, the award-winning independent marketing and sales company of UNIVERSAL Music Group. More than two years in the making, Manilow teams up once again with lyricist Enoch Anderson for this latest work. After having recorded six critically acclaimed albums of songs written by the greatest songwriters of all time – from Gershwin to Bacharach,  as well as two Platinum Christmas albums, Manilow returns at last to his true passion –songwriting. Inspired by the Andy Warhol quote that “In the future, everybody will be world famous for fifteen minutes,” this exciting guitar-driven pop album explores the perils and pinnacles of fame’s double-edged sword.

“Fame and success are something we all strive for, and yet when we get it how do we behave? That question jumps out at us daily from magazine covers, TV news and online gossip sites. In my world of entertainment, I’ve watched perfectly decent and talented people achieve the success they’ve been striving for only to crash and burn as their star rises. It happens in every walk of life, not only in the entertainment field; in sports, in politics and in daily life when the assistant manager gets promoted at the grocery store. It’s something that continues to fascinate us, and for me it represented an interesting musical journey to explore,” explained Manilow.

Making a guest appearance on 15 Minutes is young Nataly Dawn, lead singer of the white-hot group “Pomplamoose.” Her rendition of “Letter From A Fan” is both innocent and eerie. 15 Minutes produced by Manilow and Michael Lloyd is a captivating tale of someone who achieves fame, blows it and begins again. 15 Minutes is being released by STILETTO Entertainment and distributed by Fontana in association with the Universal Music Group as part of a multi-product partnership.

Barry Manilow: 15 Minutes will be released next week on Tuesday June 14th, 2011. Until the release date, check out his single entitled “Bring On Tomorrow” on Soundcloud here: http://soundcloud.com/stilettoentertainment/03-bring-on-tomorrow
For more information on Barry Manilow, you can find him on the web at: http://www.manilow.com/