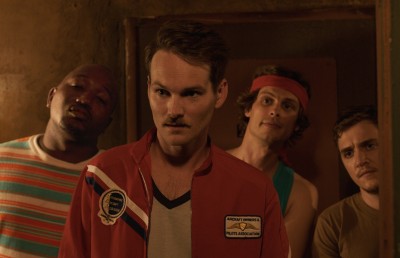 Brothers Aaron and Adam Nee clearly believe that the adventures of Tom Sawyer and Huckleberry Finn are timeless – otherwise, why try to update them in the first place?

Between them, the Brothers Nee have written and directed one of the loosest, strangest and most interesting takes on Mark Twain’s wily and unique protagonists.

Band of Robbers opens with a brief look at the young Tom and Huck, firmly establishing that they might be young but they are neither naïve or innocent – then segues to Huck (Kyle Gallner, Veronica Mars, Outsiders) sitting in a parole hearing explaining where he hoped to be in five years. On his release from prison, Huck is met by Tom (Adam Nee, Drunk History), now a cop – in his police car. Tom has set up a surprise party for Huck so as he tells to act surprised. At the party we meet the gang: Tommy Barnes (Superstore), Joe Harper (Matthew Gray Gubler, Suburban Gothic) and Ben Rogers (Hannibal Buress, Broad City, Chozen).

Tom, of course, has a plan – a plan to make them rich – and it involves robbing a pawnshop to get the fabled Merrill Treasure. Naturally, there will be obstacles – like Tom being assigned a rookie partner, Becky Thatcher (Melissa Benoist, Supergirl, Whiplash) on the big day. And, of course, the job seems to go hopelessly wrong.

As Huck notes in his narration, ‘Some things never change – even when they probably should.’

At a fairly sleek 95 minutes, Band of Robbers is pretty hectic and more than a little goofy for about the first half. Then, with clues to the treasure appearing to be real, there are, as a chapter card reads, ‘unintended consequences’ and things get more dramatic. Injun Joe (Stephen Lang) is after the treasure too, and he’s not a very nice guy.

Yet, none of the characters ceases to be exactly what they were before that turn of events, which turns them from lovable idiots into sympathetic twits in over their head – until they’re not…

Nee has the showiest role here; his Tom Sawyer is always dreaming of better things, making his plans and improvising at full throttle throughout. He’s the guy at the party who is always ‘on.’ 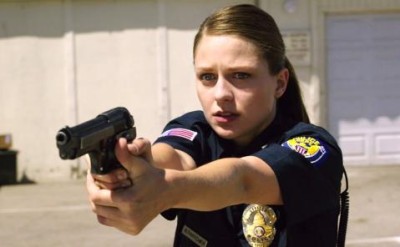 Gallner’s Huck is more than a little tired of Tom’s plans, yet still gets sucked in by the intensity of Tom’s enthusiasm and certainty that the big score is just around the next corner.

Pemberton’s Tommy is the wishy-washy guy – the guy who opts out at the faintest hint of potential danger – or even adventure.

Buress’ Ben is willing to go along mostly because of inertia, and Joe will do anything to get out of his room.

Many of the Brothers Nee’s gags are riffs on Twain – they even come up with a classic reinvention of the fence-painting gag – but they also build up the characters desperation to not be mundane. Even though Huck says some things should probably change, he’s not quick to do that.

As rookie officer Becky Thatcher, Benoist is naïve, excited and ready to go get bad guys – an unforeseen complication for Tom – even as he’s discovering that she’s kind of fun to be around.

And when things get serious, and there are two deaths – one kinda creepy and surprising; the other both surprising and hilarious – even Tom recognizes that those that need to change, probably should.

As directors, the Brothers Nee have a bit of a knack for capturing chaos as though it was no more of a problem than whistling through the graveyard – there’s a bit of an echo, but it’s all good.

Band of Robbers occasionally sparkles like you’d hope – often enough, in fact, to make it a movie that well worth watching for Twain fans.

I have no idea if Mark Twain would entirely approve of this updating of the adventures of Tom Sawyer and Huckleberry Finn, but I do hope he’d applaud the intention.