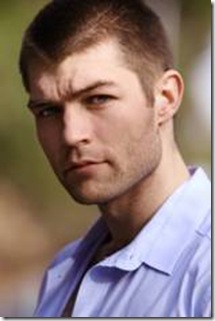 Australian actor Liam McIntyre has been selected to fill the gladatorial boots of Andy Whitfield who originated the role in the Starz series: Spartacus: Blood and Sand. As Whitfield was unable to return due to health issues, he gave his blessing to the recasting.

McIntyre takes over the role of the Thracian warrior sold into slavery in the Roman Republic city of Capua – where he rises to become the champion of the city – before leading the slave revolt that ended Season 1. The part was played in the first season of “Spartacus: Blood and Sand” by Andy Whitfield, who was forced to leave the show in order due to health issues. Whitfield gave his blessing to the recasting.

“Since no one can really replace Andy, we realized that we should instead find an actor who can truly lead ‘Spartacus’ forward,” Albrecht notes. “It was important to us to have Andy endorse the idea of recasting this part, which he did in the same heroic manner that he’s dealt with his whole ordeal. And that, coupled with our fortune in finding a young actor with the gladiator credentials and the acting ability of Liam, makes it easier for us to keep this hit franchise going.”

Liam McIntyre made his mark in his native Australia on such series as “Neighbours,” and “Rush.” He also appeared in the HBO mini-series “The Pacific.” He recently completed his first feature starring role in the independent film Frozen Moments. McIntyre is currently in New Zealand, getting himself into gladiator shape in order to take on that iconic role. Production on the series is slated to resume by Spring of 2011.

From the time “Spartacus: Blood and Sand” debuted on Starz in January, 2010, it established itself as an epic production with rich storytelling and visuals unlike anything seen previously on any TV show. Audiences responded immediately, making it the most-watched premiere in Starz’ history, and making the show the most watched cable program on nearly two-thirds of the Fridays it aired original episodes. Also starring John Hannah as Batiatus, Lucy Lawless as Lucretia, Peter Mensah as Doctore, Manu Bennett as Crixus and Viva Bianca as Ilythia, “Spartacus: Blood and Sand” was one of the most talked-about and best-loved TV shows of 2010. Season 2 of the series finds Spartacus and his fellow gladiators now out of Capua and engaged in the massive slave rebellion against Roman society that has echoed through time.

“Spartacus: Gods of the Arena,” a six-part prequel that tells the story of the House of Batiatus gladiator school, and the intricate personal, sexual and political maneuverings in Capua five years before “Blood and Sand” was set, debuts at 10 p.m. et/pt on Friday, Jan. 21. Dustin Clare, as the charismatic and self-destructive gladiator Gannicus, joins Hannah, Lawless, Mensah and Bennett in the event series.

Phot by Vanessa Dano and Tom Donata/Courtesy of Starz Entertainment