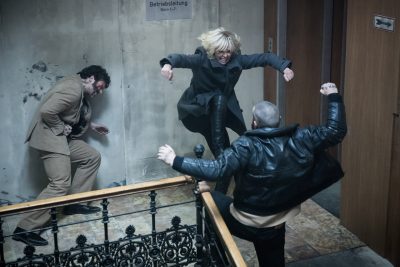 Atomic Blonde may not be as supple, flexible and dynamic is its lead, but still punches above its head in odd and intriguing ways.

To begin with, the action set pieces feel like they could have been part of a John Wick movie. Then there’s the feeling you get watching Charlize Theron – if she’s not having fun in this film, I will eat my shirt. And finally, there’s the two timelines running parallel to each other.

So let’s just set the record straight: Atomic Blonde’s MI6 agent Lorraine Broughton (Theron) is not the female Bond or the female Bourne – she’s John Wick on the (kinda) side of the angels (more or less…).

Our story begins with MI6 operative James Gascoigne (Sam Hargrave) being killed by KGB agent Yuri Bakhtin, who relieves the corpse of his watch.

Cut to Agent Broughton plunged into a bathtub full of ice water. She appears to be pretty beat up.  After her pain-relieving bath, Agent Broughton heads to MI6 headquarters where she is debriefed by her MI 6 superior, Eric Grey (Toby Jones), and CIA representative Emmett Kurzfeld (John Goodman). 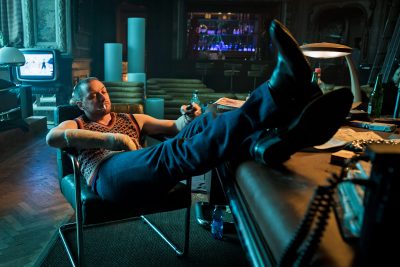 As she answers their questions, we flashback to the events she’s relating…

Before she can even meet Berlin station head David Percival (James McAvoy), she’s hijacked by a couple of KGB officers – leading to a set piece in their moving car (and involving the stiletto heel of one of her shoes!). Less than friendly contact is then made with Price.

The watch Bakhtin stole contains a list of all MI6 and CIA agents in the world and it’s Broughton’s assignment to get it back. Fortunately, the East German Stasi officer who provided the list also memorized it, so there’s a fallback position Broughton can take if she fails to retrieve the actual list.

The problem is that there’s no way to tell if anyone is who they say they are – Percival, for example, might be MI6’s Berlin station head, but he seems to be doing a booming business in black market goods (could he be the double agent known as Comrade Satchel?). 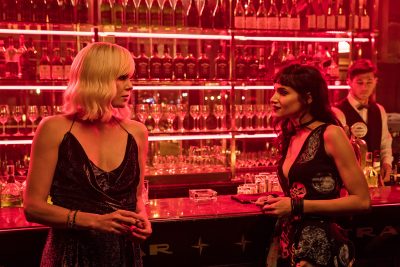 Then there’s the rookie French Intelligence operative Delphine LaSalle (Sofia Boutella) whose interest in Broughton is more than digging for intel. She seems to be in over her head until…

The script by Kurt Johnstad (300) isn’t airtight, but Leitch propels Theron through some amazing action sequences – Theron did almost all of her stunts (excepts for falls, which insurance wouldn’t cover) and you can tell – frequently holding the camera for longer than usual to properly highlight her work.

Atomic Blonde concludes with a sequence that twists everything we’ve seen in an unexpected way and changes the context for everything that has gone before. It’s quite a lot to take in – even after everything we’ve seen to that point (including one or two glaring continuity errors) – but it certainly makes the prospect of a sequel incredibly enticing.