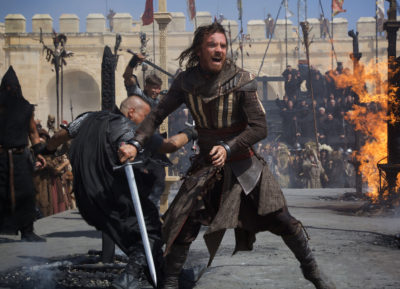 Callum Lynch wakes up the morning after his execution to discover he’s the essential part of a plan to travel back in through – through an ancestor’s memories – to locate the Apple of Eden for the contemporary Templars. In doing so, he learns that that ancestor was an assassin, tasked with keeping the Apple out of the Templars’ hands at all costs.

Assassin’s Creed is a jumbled mess of a movie that ties to achieve a mystical conclusion via a quasi-scientific means – and fails spectacularly.

While I’m not a video games player, I do like a good action movie with a science fiction or fantasy base. What I’m not thrilled by is a movie that harps on one before turning to the other without so much as a pass at an explanation.

Basically, Assassin’s Creed is about a game of keep-away between a religious sect that seeks to end violence through the use of the Apple of Eden (which I would have sworn the Bible said was eaten), and the Assassins, who seek to keep it from being used by anyone – and most, especially the Templars.

The Apple, y’see, contains ‘the seeds of man’s disobedience’ – and the Templars believe that it also contains the genetic codes for Free Will. They plan to use it to make violence stop by controlling the minds and souls of every person on the planet. So, Not Good! 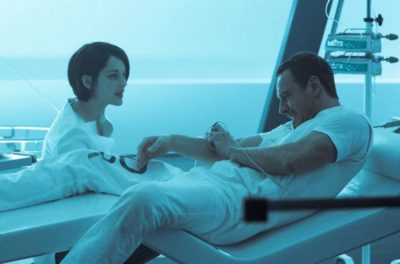 We first see young Cal (Angus Brown) as he arrives home after trying a bike stunt that goes wrong. He arrives in time to see his mother, dead on a chair, and hear the arrival of several vehicles. His father – who seems to have killed his wife, orders him to run.

Cut to Cal (Oscar®-nominee Michael Fassbender) being executed and waking up in a strange place with an incredibly beautiful woman watching him. She is Sofia (Oscar®-winner Marion Cotillard). She tells him he’s there to help her and she’s there to help him.

Through a machine called the Animus, his mind will be send back to right shotgun to his 15th Century ancestor, Aguilar de Nerha – an assassin who was the last known holder of the Apple.

In 1492, Aquilar and several other assassins work to thwart the Templars’ efforts to possess the Apple – the Templars have kidnapped the son of the Sultan Muhammad XII, who holds the only part of Spain not controlled by the Roman Catholic Church (through King Ferdinand and Queen Isabella) and demand the Apple in return for not killing the prince (Kemaal Deen-Ellis).

The best part of Assassin’s Creed is a chase sequence through Andalucía – the parkour and fights are spectacular. There are other action sequences but they don’t work nearly as well (a wagon chase is kinda ludicrous).

The sequences in the present are mostly gloomy and silly – we’re told what the Animus does but are given no clue to how and why it works. This is probably so that when we come to a mystical sequence near the film’s conclusion there’s wiggle room for the magic. There isn’t. 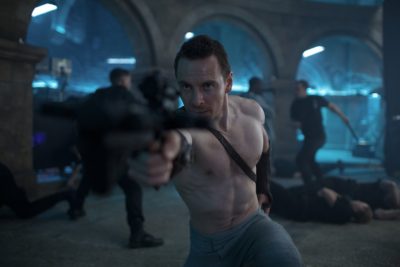 The scenes in the present are cold and uninvolving, while the scenes in 15th Century Spain are slightly warmer but, action aside, equally as uninvolving – and as gloomy.

Oscar®-winner Jeremy Irons plays Sofia’s father and boss (who steals her best lines for his speeches and takes credit for her work), but despite the alleged stakes of the film, he seems mostly bored (and it’s contagious).

Oscar®-nominee Charlotte Rampling plays the Ellen Kaye, the current leader of the Templars (unlike the Church, the Templars seem to be remarkably unsexist – one of the few good things about this movie). She, too, seems to be sleepwalking through the film.

Even the 3D is… well… listless at best.

Two things Assassin’s Creed does very well are confirm that Marion Cotillard is a very beautiful woman – and that she and Michael Fassbender have no chemistry at all (good thing there isn’t a romance, then…).

The best thing to do with Assassin’s Creed is stay home and watch the trailers (they, at least, were entertaining).