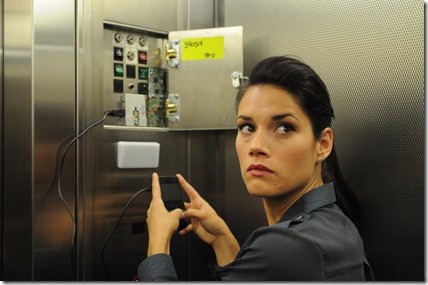 Anthony E. Zuiker’s Cybergeddon premieres on Yahoo! – in over twenty-five countries and in ten languages – on Tuesday, September 25th. The ambitious web series is a taut thriller about a team of two agents, Chloe Jocelyn and Frank Parker, and a master hacker named Chase ‘Rabbit’ Rosen and their efforts to break a worldwide cybercrime ring led by a Ukraine national, Gustav Dobreff before it’s too Late. The series’ tagline is ‘In a world where everyone is connected, everyone’s at risk.’

See the trailer now at http://screen.yahoo.com/cybergeddon/ – and follow the jump for more details (including core cast) from the official press release.

Cybergeddon follows the story of agent Chloe Jocelyn as she investigates a slew of seemingly unrelated cyberattacks with fellow agent Frank Parker and incarcerated master hacker Chase ‘Rabbit’ Rosen. Chloe and her team must crack the worldwide cybercrime ring led by Gustov Dobreff before it is too late. In a world where everyone is connected, everyone s at risk.

Cybergeddon will debut exclusively in over 25 countries and 10 languages on Yahoo! in a series of nine digital chapters – three per day over the course of three consecutive days.

The experience on Yahoo! includes an immersive site featuring additional clips that provide a deeper narrative with the characters, exclusive on-set photos, behind-the-scenes clips and interviews with the cast and crew. It will also host a special section where people can go to learn more about the stark realities of cybercrime.

Zuiker, Bill O’Dowd, CEO of Dolphin Digital Studios, and the film’s creators made a firm commitment to ensuring the storytelling around Cybereddon was not only highly compelling and suspenseful, but also inspired by real-life cybersecurity concerns. To that end, the Zuiker team partnered with online security expert Norton by Symantec throughout the creative process to lend technical insights.

"Cybergeddon is a cinematic experience that breaks traditional rules. With the global distribution arm of Yahoo!, we will give viewers a way to have more to do after watching the segments to gain more knowledge and further interact with the storyline and cast," said Zuiker. "The best part is that all of this can be experienced on any device, anytime and anywhere, day and date with the launch of Cybergeddon."

Cybergeddon is a first-of-its-kind film co-produced, distributed and financed by Dolphin Digital Studios in a deal brokered and packaged by Creative Artists Agency (CAA).

Cybergeddon is a digital blockbuster from the visionary storyteller and CSI creator Anthony E. Zuiker, set to debut this fall on Yahoo!. In a first-of-its-kind distribution model, Cybergeddon will roll out sequentially and will engage audiences through an immersive storytelling, social media and gaming experience. Norton by Symantec has been tapped to lend credibility and security insights that will help guide the narrative. The project is produced in partnership with Dolphin Digital Studios in a deal brokered and packaged by Creative Artists Agency (CAA).

Anthony E. Zuiker is one of the most creative and multifaceted individuals working in Hollywood today. He is the creator of television’s hugely successful CSI franchise, and in July of 2011, Zuiker, and his production company, Dare to Pass, signed a three-year first-look deal with ABC Studios. In addition to expanding his film and television efforts. Zuiker continues to delve into the worlds of gaming, publishing and cross-platform storytelling. He is a pioneer of the "Digi-novel" genre and author of the Level 26 series published by Dutton/Penguin Group, and the final book in the series, Dark Revelations, was released in December of 2011. Around the same time, Zuiker also released a personal memoir, MR. CSI: How a Vegas Dreamer Made a Killing in Hollywood, One Body at a Time, published by Harper Collins. Zuiker is repped by Brillstein Entertainment Partners and CAA.

Aim High simultaneously premiered on Facebook and Cambio (AOL’s Teen Site) in October, 2011. Aim High won the Writer’s Guild Award for Outstanding Achievement in Writing for Original New Media at the Writer’s Guild Awards ceremony hosted by Joel McHale and Zooey Deschanel on February 19, 2012 in Los Angeles, California. H+: The Digital Series was released on August 8, 2012 and can be viewed on YouTube.

Yahoo! is focused on creating deeply personal digital experiences that keep more than half a billion people connected to what matters most to them, across devices and around the globe. Yahoo!’s unique combination of Science + Art + Scale connects advertisers to the consumers who build their businesses. Yahoo! is headquartered in Sunnyvale, California. For more information, visit the pressroom (pressroom.yahoo.net) or the company’s blog, Yodel Anecdotal (yodel.yahoo.com). Yahoo! is the trademark and/or registered trademark of Yahoo! Inc.

Norton http://us.norton.com/ from Symantec Corporation protects the Stuff that matters to consumers, across all aspects of their digital lives. Norton provides a range of security solutions including technologies for PCs and mobile devices, live tech support services and online backup. Like Norton on Facebook at http://www.facebook.com/norton.

Symantec, the Symantec Logo, and Norton are trademarks or registered trademarks of Symantec Corporation or its affiliates in the U.S. and other countries.