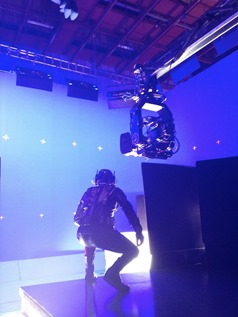 Just as Warners/DC moved Superman v Batman to go head-to-head with an as yet unnamed Marvel movie, Disney/Marvel has moved Ant-Man up a couple weeks to square off against Pan – the movie that Warners slotted into the former Superman v Batman date, July 17, 2015.

That ought to be a very interesting weekend!

The wait for Marvel’s "Ant-Man" just got two weeks shorter!

Ant-Man fans have had quite a few reasons to rejoice lately, with the casting of Paul Rudd as Scott Lang/Ant-Man and Michael Douglas as Hank Pym as we get ready to start production on the highly-anticipated film later this year!

As always, stay tuned to Marvel.com for the latest breaking news on "Ant-Man" and all Marvel Studios films!

In addition to "Ant-Man," Marvel Studios will release a slate of films based on the Marvel characters including "Captain America: The Winter Soldier" on April 4, 2014; "Guardians of the Galaxy" on August 1, 2014; and "Avengers: Age of Ultron" on May 1, 2015.