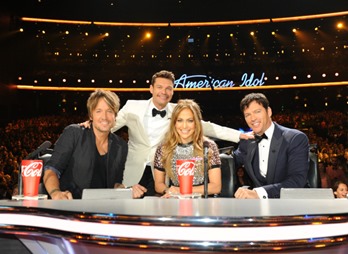 Do you know someone who could be the next American Idol? Are you encouraging them to audition? If that’s the case, you might just be rewarded for your efforts. This season,  through the American Idol True Believer Initiative, contestants will be given the opportunity to designate a True Believer who could stand to win $50,000 should they win the competition.

Check out the press release, after the jump, for details and a link to the True Believer rules. You could be the first winner of American Idol’s True Believer Initiative.

“AMERICAN IDOL XIV” PROVES THAT IT PAYS TO BELIEVE!

ENCOURAGE SOMEONE TO AUDITION AND YOU MAY BE REWARDED WITH $50,000!

The AMERICAN IDOL XIV team knows that sometimes a talented singer just needs someone to give them a little extra encouragement to help them achieve their dreams. And now, the series will honor these “True Believers” with a special AMERICAN IDOL TRUE BELIEVER reward, by giving each contestant the opportunity to designate one “True Believer” who will have the opportunity to walk away with $50,000 at the end of the season, should their contestant win! If you know of a talented singer who may need a little extra motivation to try out for AMERICAN IDOL XIV, give them a push and they could make you their True Believer! Please continue checking http://idol.ly/true-believer-rules for more details, including eligibility and rules.

Auditions will be held from approximately 9:00 AM until 5:00 PM on each bus tour audition day at each audition location (to be announced). Additional information about auditions can be found by visiting www.americanidol.com.

Singers can also audition at www.americanidol.com, by submitting an audition video online. Entrants should demonstrate their stellar singing ability by performing a song of their choice a cappella. Videos are limited to one submission per person. Please visit www.americanidol.com  for submission rules and terms and conditions. And join the conversation on Twitter #IdolAuditions

AMERICAN IDOL XIV is produced by FremantleMedia North America and 19 Entertainment, a division of CORE Media Group.“Like” AMERICAN IDOL on Facebook at facebook.com/AmericanIdol. Follow the series on Twitter @AmericanIdol and join the discussion using #idol. See photos and videos on Instagram by following @AmericanIdol. Download the AMERICAN IDOL app for iOS devices from the App StoreSM; and for Android devices at Google PlayTM Store.** Data rates may apply for app download and usage.

NO PURCHASE NECESSARY.  Open only to legal US residents who (a) are designated by a Season XIV AMERICAN IDOL contestant as their "True Believer" and (b) consent to the designation.  There are no other forms of entry.  For complete eligibility requirements and Official Rules, visit http://idol.ly/true-believer-rules. Sponsor: American Idol Productions Inc.  Void where prohibited.

Photo by Michael Becker/Courtesy of Fox