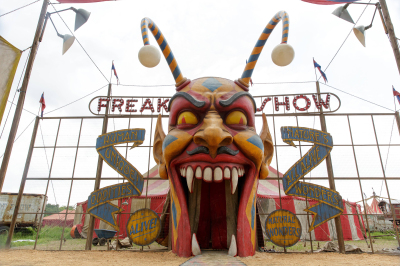 American Horror Story: Freak Show (FX, Wednesdays, 10/9C) is built around a once proud freak show that has settled into the community of Jupiter, Florida in hopes of building a destination attraction that can survive the inroads being made by television. Things are complicated by a series of gruesome murders that may, or may not, be connected with the show.

From the moment a milkman discovers the body of one of his regular customers – and the creature in a bedroom in the house – Freak Show moves a deliberate, almost stultifying pace. Even the sequence with a gurney rushing down a hospital corridor seems static.

When Elsa Mars (Jessica Lange) visits the hospital and it’s revealed that the ‘horrifying’ discovery in the Tattler house is Siamese twins Dot and Bette Tattler it almost feels anticlimactic. Neither is it a huge surprise that Bette and Dot are opposite personalities.

Still, the early sequence showing a grotesque clown (John Carroll Lynch) approaching a young couple in a field outside of town works – mostly because clowns are scary. Despite a scene where we see the clown on a carousel on the freak show’s lot, there doesn’t seem to be any connection between the two – at least not in the premiere.

Elsa’s collection of freaks includes everything from a bearded lady (Kathy Bates) and a lobster boy (Evan Peters) to a tiny Indian woman (Jyoti Amge) and the Amazon Eve (Erika Ervin). Possibly because of the size of the cast, we never really get to know any of them really well – though Jimmy Darling (the lobster boy) and his mother, Ethel (the bearded lady) are seemingly at odds, and Elsa’s longing to be a star does connect at least a little.

The idea of the police suspecting Bette/Dot of their mothers’ murder because they’re ‘monsters’ is kind of lame, though Elsa’s impassioned defence of them is not – and she knows whether they did it or not. Several bits don’t quite work – Jimmy’s extracurricular money making is both unfunny and uncomfortable (only one of those seems to be intended), and the clown gets old pretty quickly.

Then there’s the musical number that plunks a David Bowie song from 1971 into a 1952 freak show. It’s a moment that should be a grand bit of campy theater but feels strangely forced. The would be buyers (Frances Conroy, Finn Wittrock) of Elsa’s main attraction also didn’t really do much for me, though they do seem to be in a position to develop in interesting ways – and did at least succeed in setting up some potential stakes above and beyond the clown killings.

Basically, American Horror Story: Freak Show seems flat in comparison with Coven. Since I enjoyed the first three seasons of AHS – season three being the best in my opinion – I’m willing to give it some time, but it really needs to go beyond freaks and killer clowns if it wants to keep an audience.