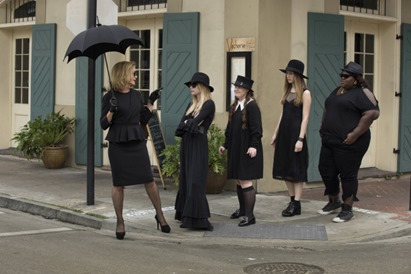 The third annual American Horror Story treat, Coven, is an over-the-top delight with its combination of witches, magic, wicked humor and nasty drama. As the episode tag reads, ‘A young girl, Zoe, is shattered to discover she possesses a strange genetic affliction tracing back to the dark days of Salem. Zoe is whisked away to Miss Robichaux’s Academy for Exceptional Young Ladies, a mysterious school in New Orleans devoted to safeguarding the few remaining descendants who share this unique bloodline. Harboring a secret agenda, Fiona Goode, the most powerful witch of their generation, returns to town, reigniting old rivalries with the Coven’s deadly enemies, the Voodoo.’

Written by series co-creators/showrunners Murphy and Brad Falchuk, and directed by Alfonso Gomez-Rejon, the season premiere, Bitchcraft, is chockfull of torture, bitchiness, rape and revenge – and maybe a few other extreme acts.

It’s perhaps even faster paced than the series and second-season premieres and opens with a sequence of moody 19th century New Orleans – in which Madam Delphine LaLaurie (Kathy Bates) holds a civilized party in her home while grotesquely tortured slaves moan in her basement. She uses a poultice made with human pancreas to keep herself youthful. Naturally, she does get her comeuppance – from a voodoo woman named Marie Laveau (Bassett).

From there we cut to Zoe Benson (Farmiga) discovering she’s a witch when she loses her virginity – with disastrous results – and being shipped off to Miss Robichaux’s Academy for Exceptional Young Ladies, a sanctuary and school for young witches run by Delia Goode (Paulson). There she meets three other young witches: bitchy movie star Madison Montgomery (Roberts); human voodoo doll, Queenie (Gabourey Sidibe) and clairvoyant Nan (Brewer).

No sooner does she get more or less settled in than Delia’s mother, Fiona (Lange), the most powerful witch of her generation, moves back in after a failed attempt to regain her youth in a failed stem cell experiment.

As with previous incarnations of AHS, this year’s model is campy melodrama with moments of genuine drama, oddly appropriate humor and unsettling nastiness. It’s like a waking nightmare layered over a malarial fever dream. Every moment leads, with no warning, into some new and different strangeness.

More than once, while watching Bitchcraft, I was reminded of the John Mellencamp song Hurts So Good. That is not a bad thing – at least in this case.