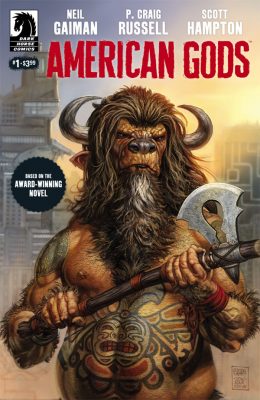 Neil Gaiman’s American Gods is being adapted for television by a team led by Bryan Fuller (Pushing Daisies, Hannibal). It will undoubtedly be one of the stranger shows on TV, but it won’t be on TV for a while.

Fortunately, Dark Horse Comics has enlisted P. Craig Russell and Scott Hampton to adapt the novel for comics and we don’t have to wait – it’s coming out on March 15th.

The epic tale of a man caught in a war between the Old Gods and the New, American Gods follows ex-convict Shadow Moon as he takes a job as bodyguard to the mysterious Mr. Wednesday – a man who seems to almost know more about him than he does himself.

American Gods #1 opens with Shadow in prison and counting the days until he is released so he can go home to his beautiful wife, Laura. He even has a job waiting thanks to a buddy who owns the place where he used to train.

Because he’s a large, fit guy, he’s mostly left alone – though one cellmate persuades him to read Herodotus’ Histories and another warns him of a storm coming and not the kind that you can take shelter from in a house.

Toward the end of his time, he begins to feel like there’s something bad coming and, one night, has a nightmare that seems potentially prophetic.

A few days before he’s to be released he learns that Laura has died in an automobile accident. He is released early on compassionate grounds and flies home – only another kind of storm makes his flight divert and he winds up having to change planes.

When he gets on this new flight, a man sitting across the aisle from him tells him that he’s late. Then he offers him a job.

As a writer, P. Craig Russell is a dab hand at creating much without doing a lot (unlike his art which tends to be very detailed – almost baroque). He’s also extremely good at laying out a story on the page, as he does here.

The result is that, while using Gaiman’s words, Russell keeps the actual verbiage to a minimum – letting the intricacy of his layouts do as much work as the words.

Scott Hampton, following Russell’s lead doesn’t go overboard on detail work, either. His fills are more than sketches, but not too much more – they’re almost impressionistic. He takes the story and characters in different directions than my mind went when I re-read the novel a few years ago, but in a way that feels right.

His Shadow is a solidly built man of color – possibly black, possibly Amerind or a combination – who looks like he can take care of himself if he has to, but also communicates intelligence and both resolve and heartbreak in his carriage. We don’t need Gaiman/Russell’s words to know how he feels, but their rhythms give him extra layers.

Mr. Wednesday looks like a much younger man than I was expecting – and in better shape. He could be an executive flying first class if it weren’t for his eyes being differing shades of grey and his knowing so much about Shadow – whom he’s never met before.

As part of setting the stage for subsequent events, American Gods #1 deals with a fair bit of exposition, but it never feels like an infodump. Instead, it’s more like being privy to the thoughts of someone in a unique position to set up a specific tale. It feels completely natural and not the least bit forced (this is, as any Gaiman fan can tell you, is a particular strength of his).

Even though half the first issue deals with Shadow in prison – and even though he never finds himself in any trouble there – it’s never boring. Shadow is an intriguing character before events spin out of whack.

From the moment he meets Mr. Wednesday, though, the pace quickens – and the issue concludes with the introduction of another player in that other kind of storm that’s coming.

The cover by Glen Fabray and Adam Brown (above) is stellar – as are the variants by David Mack and Dave McKean (I’m partial to the Mack, but all three would look good framed in a gallery).

If you’ve read the novel, you’ll enjoy this take on it. If you haven’t, chances are that you’ll be hooked within a few pages.

While I’m eagerly awaiting the TV series, I have to say that between the novel and what I’ve seen of the comic, it’s going to have to be pretty amazing to equal either.