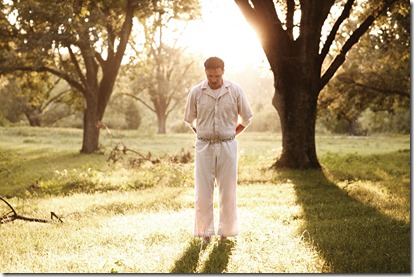 Sundance Channel’s Rectify is one the year’s best new TV series, but a lot of people may have missed it because of its niche location. To rectify (sorry) that situation, AMC will running the show’s six-episode first season in a marathon on Sunday, July 14th, beginning at 9/8C am.

AIRING ON AMC SUNDAY JULY 14th STARTING AT 9AM ET/PT

FOR IMMEDIATE RELEASE – Starting Sunday July 14th at 9:00AM ET/PT AMC invites viewers to tune-in to a marathon of “Rectify”, which originally aired on their sister-network, Sundance Channel.  The drama series created and written by Ray McKinnon, and executive produced by Mark Johnson and Melissa Bernstein, the award-winning team behind “Breaking Bad”.  Viewers can catch up on the series that has been hailed by TV Guide’s Matt Roush as “TV’s most absorbing, unsettling new drama” and by The Daily Beast’s Jace Lacob as “quite simply, the best new show of 2013”.

When Daniel Holden (Aden Young) is released after 20 years of complete isolation on death row, he returns as an outsider to his family, to his community, and to the times. Somehow, he survived the mental and emotional strain of his imprisonment, but now the walls have suddenly come crumbling down and Daniel is set free in a world he no longer understands. He’s an outsider, lost in a once familiar world, struggling to navigate his new found freedom. Combined with two decades of technological and social changes to his small town and the larger world, everything he encounters is a puzzle.

Daniel’s unexpected presence not only throws his family into disarray, it ripples out to all the people connected to his case – the prosecutor who rode the notoriety to become a State Senator, the Sheriff who pushed the boundaries of the investigation, and the entire town of Paulie, GA that blamed him for killing one of their own. Like a deadly spark, Daniel’s release reignites the mystery, the power plays, and the questionable justice that condemned him.

After 19 years on death row, Daniel Holden is released due to new DNA evidence. He returns with his family to his childhood home, struggling to adjust to life on the outside. Meanwhile, the Senator who prosecuted him plots to reopen the case.

While Daniel explores town on his own, Amantha worries for his safety. Ted Jr. fears for the future of the family business. And Senator Foulkes learns some valuable gossip from his secret lover. Unease and tension pervade Daniel’s welcome home party.

Daniel retreats from the stress of recent events as his return opens old wounds. Tawney reaches out to him, unbeknownst to her husband. Jon confronts Daniel’s original defense lawyer. And Amantha fears the town’s anger may erupt any moment.

Janet’s day in town with Daniel becomes a media spectacle. Back on the case, Sheriff Daggett questions Trey Willis about a missing witness. Daniel and Tawney connect in unexpected ways.

Daniel loses his grip on reality as he wrestles with life after death row. Following a surreal night with a mysterious stranger, he finds himself at odds with Ted Jr. – who questions Daniel’s innocence.

As the town’s anger hits the boiling point, Daniel’s family goes on alert. Foulkes presses the D.A. for a retrial. Ted Jr. and Tawney recover from disturbing encounters. Trey Willis searches for the missing George Melton. Daniel must decide his future.