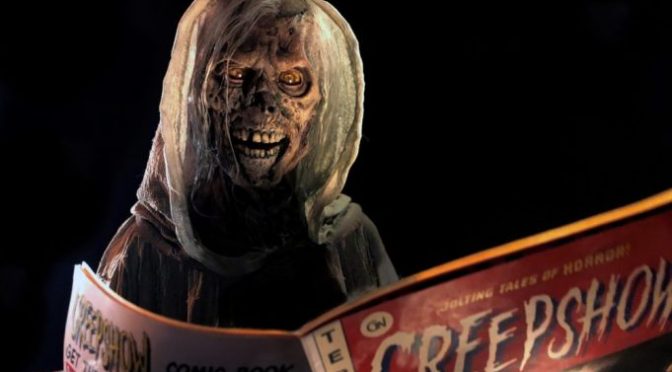 Creepshow Season 1 will air over six weeks (instead of three) on Mondays at 10:00pm ET/9c beginning May 4 through June 8.

NOS4A2 Season 2, which consists of 10 episodes, will now premiere on Sunday, June 21 at 9:00 p.m. ET/8c (Previous premiere date was Monday, June 1.) The full season will still simulcast on BBC America.

NOS4A2’s second season picks up eight years after the events of season one. Vic McQueen (Ashleigh Cummings) remains more determined than ever to destroy Charlie Manx (Zachary Quinto).  Charlie, having faced his own mortality, emerges desperate for revenge against Vic.  This time, he sets his sights on the person who means most to Vic – her eight-year-old son Wayne.  The race for Wayne’s soul sends Vic and Charlie on a high-speed collision course, forcing both to confront the mistakes of their pasts in order to secure a hold on Wayne’s future. Based on Joe Hill’s best-selling novel of the same name, NOS4A2 is executive produced by showrunner Jami O’Brien (Fear the Walking Dead, Hell on Wheels) and Hill.  The series is produced by AMC Studios in association with Tornante Television.

A six-part episodic anthology series, Soulmates is set fifteen years into the future, when science has made a discovery that changes the lives of everyone on the planet – a test that unequivocally tells you who your soulmate is.  In a first-ever format for AMC, each episode features a different cast and explores an entirely new story around discovering (or opting not to discover) the results of this new test and the impact of those results on a myriad of relationships.  Written by Emmy® Award-winner Will Bridges (Stranger Things, Black Mirror) and Brett Goldstein (Superbob, Adult Life Skills), the series stars Sarah Snook (Succession, The Dressmaker, Steve Jobs), David Costabile (Breaking Bad, Billions), Sonya Cassidy (Lodge 49, Humans, The Woman in White), Charlie Heaton (Stranger Things), Malin Akerman (Billions, Dollface, Rampage), Betsy Brandt (Breaking Bad, Life in Pieces) and JJ Feild (Turn), among others.