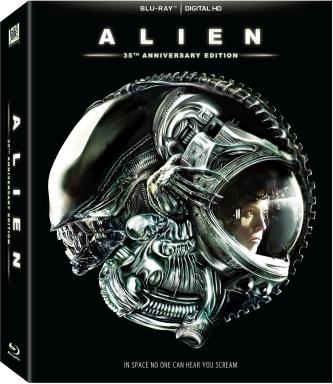 Ridley Scott’s Alien and Kingdom of Heaven are coming to Blu-Ray on October 7th.

Alien will get a special 35th Anniversary package with new extras – including a reprint of the original ALIEN comic book and
collectible art cards in memory of the late H.R. Giger – while Kingdom of Heaven Ultimate Edition will collect all three cuts of the film for the first time.

Ridley Scott’s Sci-Fi Masterpiece Celebrates its 35th Anniversary With All-New Blu-ray Edition Arriving October 7 from Twentieth Century Fox Home Entertainment
Includes Reprint of Original ALIEN Comic Book and
Collectible Art Cards in Memory of the Late H.R. Giger
ALIEN 35th Anniversary Edition
A word of warning…. This Halloween revisit one of the scariest films of all-time as ALIEN: 35TH Anniversary Edition arrives on Blu-ray October 7 from Twentieth Century Fox Home Entertainment. This Limited-Edition Set includes both the theatrical version and director’s cut on Blu-ray, along with audio commentaries, deleted scenes and more — PLUS — a reprint of the original Alien illustrated comic and all-new, collectible art cards as a tribute to the late H.R. Giger, creator of the iconic movie monster that started it all.
When the crew of the space-tug Nostromo responds to a distress signal from a barren planet, they discover a mysterious life form that breeds within human hosts. The acid-blooded extraterrestrial proves to be the ultimate adversary as crew members battle to stay alive and prevent the deadly creature from reaching Earth. Directed by Ridley Scott and starring Sigourney Weaver in her breakout performance as Ripley, this legendary first film in the ALIEN saga will leave you breathless!
Throughout 2014, Twentieth Century Fox Consumer Products is honoring the milestone 35th anniversary with a yearlong celebration marking the beginnings of the Alien legacy by releasing commemorative and fan-favorite products. Best in Class licensees including Dark Horse Comics, SEGA, NECA, Titan Publishing, Sideshow Collectibles, Diamond Select toys, Super7 x Funko and other partners will roll out exclusive branded publishing, toys and collectible merchandise worldwide to celebrate the ALIEN franchise.  The highly-anticipated first person survival horror game Alien: Isolation will be available on the PlayStation®4 computer entertainment system and Xbox One, the all-in-one games and entertainment system from Microsoft, as well as PlayStation®3 computer entertainment system and the Xbox 360 ® video game and entertainment system from Microsoft and PC also on October 7. In addition to Alien: Isolation, hardcore fans can finally add Lieutenant Ellen Ripley to their ALIEN collections as we welcome her NECA figures into the family of officially-licensed merchandise. Many other exciting first-time and limited edition products will also release to celebrate this exciting milestone this year.
Fans can also help celebrate the 35th anniversary of ALIEN by joining the fight at www.AlienRevolt.com. Simply login to Facebook to create your profile, choose your team and complete the missions, sharing your triumphs with friends. The more badges you earn the bigger chance you have taking home some great ALIEN prizes including H.R. Giger’s Alien Diaries, a copy of the all-new ALIEN: ISOLATION video game from Sega and more!
Media Inquiries:
TCFHE: Conor Sellers, 310.369.3980, conor.sellers@fox.com
Hill + Knowlton Strategies: Dominique Dorais, 416.413.4582, Dominique.Dorais@hkstrategies.com
###
RIDLEY SCOTT’S EPIC HISTORICAL ACTION DRAMA GETS THE ULTIMATE EDITION TREATMENT 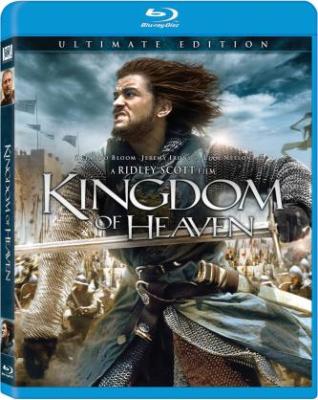 Own ALL Three Versions of the Film in One Collection for the First Time – Arriving On Blu-ray October 7
Kingdom of Heaven: Ultimate Edition
From visionary director Sir Ridley Scott comes a cinematic masterpiece with this 2-Disc Blu-ray™ Edition that includes all three versions of the film — the Director’s Cut, Director’s Cut Roadshow Version and Original Theatrical Version — all presented in high definition, plus over nine hours of in-depth special features, including a full-length documentary that takes you on the path from pre-production to release. On the brink of celebrating its 10th anniversary, a truly legendary cast leads this visually spectacular epic, including Orlando Bloom, Eva Green, Liam Neeson and Academy Award®-winner Jeremy Irons*.
Bloom stars as Balian, a young blacksmith who has lost his family and his faith. But when his father (Neeson) reveals his destiny, Balian joins the heroic fight to protect his people from overwhelming forces, and rises to knighthood.
*Best Actor in a Leading Role; Reversal of Fortune (1991)
Media Inquiries:
TCFHE: Conor Sellers, 310.369.3980, Conor.Sellers@fox.com
H+K (Print + Broadcast): Dominique Dorais, 416.413.4582, Dominique.Dorais@hkstrategies.com
About Twentieth Century Fox Home Entertainment
Twentieth Century Fox Home Entertainment is the industry leading worldwide marketing, sales and distribution company for all Fox produced, acquired and third party partner film and television programing. Each year TCFHE expands its award-winning global product portfolio with the introduction of new entertainment content through established and emerging formats including DVD, Blu-ray™ and Digital HD™. Twentieth Century Fox Home Entertainment is a subsidiary of 21st Century Fox.