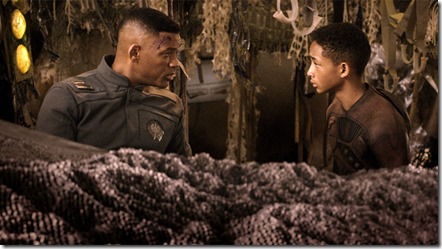 The story comes from Will Smith and he and his wife, Jada Pinkett Smith are among its producers – so there’s definitely the possibility that After Earth is some hybrid of vanity/ego project. While it’s not the greatest movie Smith has ever been in (see: Wild Wild West), neither is it the turkey that director M. Night Shyamalan’s last several movies have been.

What it is, is a sweet, middling-to-decent father/son, mentor/protégé story couched in sci-fi adventure trappings.

It’s been a thousand years since humanity has left the Earth it destroyed for Novus Prime, an Earth-like planet that had seemed perfect until it was invaded by an alien species called the Ursa – a blind, insect/crustacean-looking species that track its foes by smelling the pheromones released by a person’s fear. It can only be beaten by finding a way to overcome fear to the point that those pheromones are never released – essentially rendering the Ursa blind.

Cypher Raige (Will Smith) is the legendary warrior who first ghosted. He’s also a general in the military who is home very infrequently. His wife, Faia (Sophie Okonedo) does most of the parenting of son Kitai (Jaden Smith). There was a daughter, Senshi (Zoe Kravitz, now going as Zoe Isabella Kravitz) – but she died at the pincers of an Ursa after placing young Kitai (Jaden Martin) under a glass bubble that kept the Ursa from smelling him.

Kitai has grown into a smart, tough young man who has just been in the Ranger Cadet program but did not get promoted to Ranger and has to give his father the bad news – which Cypher takes fairly well.

At Faia’s urging (‘He needs a father – not a CO!’), Cypher takes Kitai on what should be a milk run – transporting a well-secured Ursa to another planet for study and training. An unexpected asteroid storm disrupts the ship’s graviton drives and the ship crashes on a class-one quarantined planet, where everything has evolved to killed humans.

The emergency beacon nearest to hand is broken in the crash but there is another in the tail section – a hundred kilometres away. Cypher has had both of his legs broken and everyone else is dead, so it’s up to Kitai to make the journey alone – though communication via a cool gizmo worn on the forearm (Kitai) and the ship’s miraculously still functional comm panel (Cypher).

The planet, of course, is Earth (not a spoiler – it’s revealed in at least one of the trailers but it’s an improbable place where the nightly frost-overs don’t kill the lush tropical foliage – and where baboons, hyenas, giant boars and giant eagles all live. Another problem is that the atmosphere is not as oxygen rich as Novus Prime, so Kitai must inhale a liquid that will allow him to draw enough oxygen from the air to keep himself able to function.

Although as derivative as Oblivion, After Earth really stresses the growth of the relationship between Cypher and Kitai. Unfortunately, the most prominent kinds of acting here are clenched jaw acting (Will smith) and eyebrow acting (Jaden Smith). Because Cypher is stuck at the comm panel with two broken legs, and the only painkiller available would make communication with Kitai unlikely, he has to grit his teeth and make do (including patching his leg up with an arterial shunt sans painkillers)

On the other hand, Kitai didn’t make it to Ranger because, although he aced class work, he fell apart in the field. With the Ursa prisoner possibly loose, and all manner of strange local beasties that could kill him, Kitai spends most of his time with furrowed brow.

Since we know Papa Smith has terrific range, it’s a bit of a mystery that he does so little with Cypher. The same problem holds true for Jaden – he was really good in Pursuit of Happyness and The Karate Kid but is very limited here. Still, it would be a huge surprise if the two smiths didn’t have chemistry and that gives some depth to the father/son story.

The saddest thing about After Earth is that it has two strong actors – in Okonedo and Kravitz – but gives them very little to do. Neither has more than five minutes onscreen. Even though those few moments allow them to play pivotal arts in the plot, it’s still a shame to such talent virtually wasted.

On the technical side, whatever you might think of Shyamalan’s last three or four movies, he does know how compose pretty pictures – and After Earth is lovely to look at. He also paces things well, carefully building to each of Kitai’s action-packed encounters with potentially lethal critters. The CG is virtually undetectable most of the time and is blended into some beautiful location and well-designed stages.

In the end, After Earth is an average movie that has a few slightly above average moments and one genuinely great line (which I won’t spoil for you) in the last few minutes before the end credits roll. If not for the father/son story, it could have been much worse.