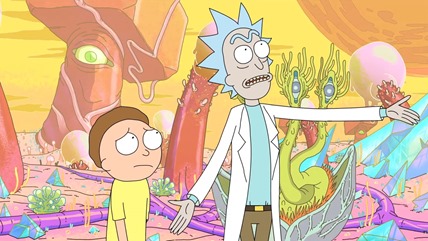 Let’s talk audacious experiments. Adult Swim has posted next Monday’s episode of Rick and Morty on Instagram. Fans who have the patience – the ep is broken down into more than one hundred clips to meet Instagram’s 15-second limit on video posts – can watch the ep online right now.

In a television network first, Adult Swim, basic cable’s #1 network for young adults 18-34, announced today that as a special marketing event, they have premiered a brand new episode of their original comedy animated series Rick and Morty on the popular social media platform Instagram, where some people became instantly popular using all the means possible from announcing in other social media to buy Instagram likes.  Fans can be the first to see Monday’s new episode online right now on the Rick and Morty Instagram account.

Not for the faint of heart, the episode is cut up into more than 100 clips to meet the Instagram limits of posting video clips of 15 seconds or less. Adult Swim feels Rick and Morty fans are more than up to the challenge. The half-hour animated series about a sociopathic scientist who drags his unintelligent grandson on insanely dangerous adventures across the universe currently airs on Adult Swim on Mondays at 10:30 p.m. ET/PT as one of the network’s first primetime original shows.

After missing for nearly 20 years, Rick Sanchez (Justin Roiland) suddenly arrives at his daughter Beth’s (Sarah Chalke) doorstep looking to move in with her and her family. Beth welcomes him with open arms, but her unremarkable husband Jerry (Chris Parnell) isn’t too thrilled about the tearful reunion as Rick’s arrival serves to shake things up quite a bit around the household. Rick converts the garage into his personal laboratory and gets to work on all sorts of dangerous sci-fi gadgets and contraptions. That wouldn’t be so bad if not for the fact that Rick continues to involve his grandchildren Morty (Roiland) and Summer (Spencer Grammer) in his insane adventures.