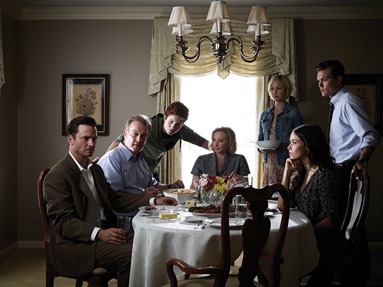 Sundance Channel’s critically acclaimed drama series Rectify (we ranked it in the top four shows of 2013) has begun production on season two. Released from prison after nineteen years, Daniel Holden (Aden Young) finds himself in what, for all intents and purposes, is an alien world – where everyone, family included, is a stranger. In a place where his release divides his community, he is unsure if he should even live or die. Whether he’s guilty of innocent may not even matter.

Rectify will air in summer 2014. Follow the jump to check out the press release for more details.

New York, New York –February 3, 2014 – SundanceTV announced today that production has commenced on the highly anticipated sophomore season of its original drama series “Rectify.” The hour-long drama was created and written by Ray McKinnon (The Accountant, That Evening Sun, Mud), who also serves as executive producer on the project under his shingle Zip Works. Production will once again take place in Griffin, GA.  The ten-episode second season will air in Summer 2014.

“Rectify,” which debuted in 2013 to overwhelming critical acclaim, was the first wholly-owned SundanceTV scripted production. Included on over 35 year-end “best of” lists, including Time, TV Guide, and A.V. Club, season one was heralded by The Daily Beast as “a breathtaking work of immense beauty and a thought-provoking meditation on the nature of crime and punishment, of identity and solitude, of guilt and absolution. It is, quite simply, the best new show of 2013.” Mary McNamara of the Los Angeles Times said “‘Rectify’ is a revelation that sets a new standard,” while Matt Roush of TV Guide gave the series a “10 out of 10,” commenting that ‘Rectify’ is “impeccably written and acted, quietly suspenseful and achingly poignant.”

Season one of “Rectify” depicted the first week in the life of Daniel Holden (Aden Young) following his release from death row to a world he no longer understood, to build a life he may not be allowed to keep. As Daniel tried to find a place in his reconfigured family and within a community deeply divided about his return, his presence reignited old wounds and introduced unexpected complications for those closest to him. In season two we find Daniel unsure if he wants to live or die, if he’s guilty or innocent and if it ultimately even matters. The season will track Daniel’s journey to find meaning in his life in the face of a dangerous and unpredictable world. It will also delve into the lives changed indelibly by Daniel’s return.

About SundanceTV
SundanceTV is making and celebrating television as distinctive as the best independent films. Working with today’s most remarkable talent, SundanceTV is attracting viewer and critical acclaim for its original scripted and unscripted series. Launched in 1996 and owned and operated by AMC Networks Inc., SundanceTV delivers on the spirit of founder Robert Redford’s mission to celebrate creativity.