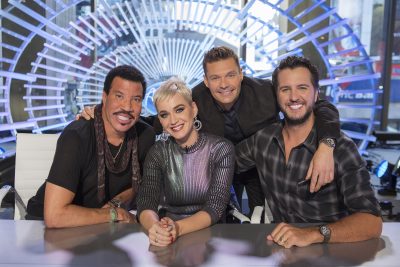 ABC has renewed its music competition series for a second season – judges panel and host intact.

Music Luminaries Luke Bryan, Katy Perry and Lionel Richie to Return as Judges, and Ryan Seacrest to Return as Host

The journey continues as America’s beloved singing competition series “American Idol” is set to return for its second season on The ABC Television Network for the 2018-2019 season. Following the historic revival of the beloved series on ABC, the fan favorite will set out once again on a nationwide search to discover the next singing sensation. Returning to help find the cream of the crop are music industry legends and all-star judges Luke Bryan, Katy Perry and Lionel Richie. Emmy®-winning producer Ryan Seacrest will also return to helm the music competition series as host.

“We knew that ‘American Idol’ on ABC would unleash an opportunity for singers from all walks of life to realize their dreams and that these incredible contestants would have America rooting for their success,” said Channing Dungey, president, ABC Entertainment. “I am thrilled that Katy, Luke, Lionel and Ryan will be back to once again embark on this Idol journey with us to discover the next crop of inspiring talent.”

“’American Idol’’s return on ABC has shown once again that viewers love to discover and support raw talent,” said Trish Kinane, president of Entertainment Programming, FremantleMedia North America, executive producer and showrunner of “American Idol.” “Our new judges Katy Perry, Luke Bryan and Lionel Richie have brought huge credibility, energy and fun to the show this year, and we are so excited to continue the journey with Ryan Seacrest at the helm in the search for the next superstar.”

Dennis Miller, executive chairman of CORE Media Group, added, “Our team is incredibly proud of the success we have had with ‘American Idol’ on ABC, and we are excited to search for more talent nationwide with a second season. We look forward to furthering our relationship with the network, our partners at FremantleMedia, Luke, Katy, Lionel, Ryan, and all those who audition to become the next American Idol as we continue to entertain fans with incredible performances week after week!”

The official “American Idol” app is available on iOS and Android devices. Using the app, fans can vote for their favorite contestants, as well as on AmericanIdol.com/vote or via text. Fans can also use the app to “IDOLize” their selfies with “American Idol” filters and stickers, and track what’s trending with judges, contestants and fans.