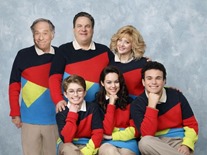 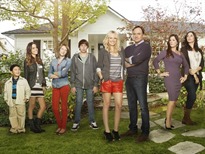 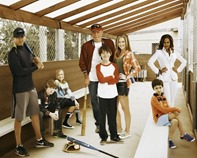 Follow the jump for series descriptions and the link to Watch ABC.

Summer is over and the new Fall TV season is officially kicking off online and on mobile devices as ABC premieres three of its most anticipated new fall comedies, “The Goldbergs,” “Trophy Wife” and “Back in the Game,” on demand via WATCHABC.com and the WATCH ABC app for smart phones and tablets. The series are available through September 17, 2013.

“The Goldbergs”: Before there were parenting blogs, trophies for showing up and peanut allergies, there was a simpler time called the ‘80s. For geeky 11-year-old Adam (Sean Giambrone), these were his wonder years, and he faced them armed with a video camera to capture all the crazy. The Goldbergs are a loving family like any other — just with a lot more yelling. Mom Beverly (Wendi McLendon-Covey) is a classic “smother,” an overbearing, overprotective matriarch who rules this brood with 100% authority and zero sense of boundaries. Dad Murray (Jeff Garlin) is gruff, hot-tempered and trying to parent without screaming. Sister Erica (Hayley Orrantia) is 17, hot, terrifying and not one to mess with. Barry (Troy Gentile) is 16, an overly emotional teen with severe middle child syndrome. Adam (Sam Giambrone) is the youngest, a camera-wielding future director who’s crushing on an older woman. Rounding out the family is beloved grandfather Al “Pops” Solomon (George Segal), the wild man of the clan, a shameless Don Juan who’s schooling Adam in the ways of love. When Pops buys a new sports car and offers his Caddy to middle child Barry, it’s enough to drive this already high-strung family to the brink of chaos.

“Trophy Wife”: They say the third time’s the charm, and reformed party girl Kate (Malin Akerman) is hoping that’s true when she becomes the third wife of a slightly older man, Pete (Bradley Whitford). They fell into each others’ arms (literally) at a karaoke bar, and flash forward a year later, Kate finds herself with an instafamily complete with three stepchildren and two ex-wives. But Kate is determined to make this work and become a part of the family no matter what.

Diane (Marcia Gay Harden) is ex-wife number one, an intense and overachieving former Olympic athlete and the mother of teenagers Hillary (Bailee Madison) and Warren (Ryan Scott Lee). Diane is quick to convey her withering disapproval of Kate’s barely tapped maternal instincts. Daughter Hillary is not a fan of her new step-mom either, despite Kate’s attempts to win her trust. And son Warren may have an erotic fixation on his dad’s beautiful, young spouse. Ex-wife number two, Jackie (Michaela Watkins), is mother to adopted son Bert (Albert Tsai), and can pull Pete’s strings with her special blend of neurotic, new-ageyness.

Juggling all this baggage is uncharted territory for Kate, who finds support in the most unusual place – with her best friend, Meg (Natalie Morales), a party-hearty singleton and the only woman Kate knows who has less experience with kids than she has.

“Back in The Game”: Terry Gannon Jr. (Maggie Lawson) was an All Star softball player until life threw her a couple of curve balls — a baby, a lost college scholarship and a cheating loser for a husband. After striking out on her own, Terry and her son, Danny (Griffin Gluck), move back in with her estranged father, Terry Sr., aka “The Cannon” (James Caan). The Cannon is an opinionated, beer-guzzling, ex-athlete who never quite made the cut either as a single father or professional baseball player. As hard as Terry tries to keep Danny away from the sports-driven lifestyle that corrupted her youth, Danny continues to be interested in baseball, if only to gain attention from his new crush, Vanessa (Kennedy Waite). Danny’s stunning lack of baseball skills (he doesn’t even know which hand the mitt goes on) makes him the laughing stock of the field, and of his grandfather’s living room. When Danny and a group of other athletically-challenged hopefuls fail to make the local youth baseball team, coached by Terry’s new rival, Dick Slingbaugh (Ben Koldyke), Danny’s disappointment forces Terry to face her past. So when Lulu (Lenora Crichlow), the wealthy parent of another child who didn’t make the cut, volunteers to finance a new team for the rejected kids, Terry reluctantly offers to coach the team of misfits.

Over the past several years, the Disney/ABC Television Group has consistently unveiled innovative, award-winning multiplatform services and apps. In addition to the WATCH services, other notable DATG apps include the Disney Junior Appisode app, which offers true interactive viewing, allowing kids ages 2-7 to touch, tap, swipe, tilt, shake and talk their way through various fun-filled activities embedded into episodes of some of their favorite Disney Junior shows; the ABC Player and ABC Family Player apps, which make full ad supported episodes available for viewing; the ABC News app; and the Emmy Award-winning official Oscars app, which provided unique backstage viewing experiences for the 83rd, 84th and 85th Academy Awards.