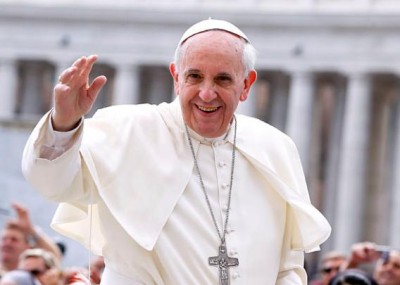 When Pope Francis visits the United States, ABC News will be offering extensive coverage of the event.

George Stephanopoulos, David Muir and Dan Harris Anchor and Report from Washington, D.C., New York and Philadelphia, while Terry Moran and Cecilia Vega will travel with the Pope.

Coverage will begin with the Pope’s arrival on Wednesday, September 23rd and all ABC News programs and platforms will be dedicated to the complete coverage of all papal events during his visit. For details, follow the jump.

Terry Moran and Cecilia Vega Travel with the Pope

ABC News announced today coverage of Pope Francis’ first visit to the United States and Cuba with comprehensive reporting on all of the major developments from every city on the Pope’s schedule, including Washington, D.C., New York, Philadelphia and Havana. ABC News will offer complete coverage of all papal events, including his arrival at Joint Base Andrews, White House visit, addresses to a Joint Meeting of Congress and the United Nations General Assembly, as well as motorcade stops, parades, Vespers and Mass.

ABC News Digital will carry all of the Pope’s live events on ABCNews.com/Live and will be GoStreaming from Washington, D.C. and New York City during his visits. ABC News will produce several digital shorts to mark the Pope’s arrival, including pieces about the Pope and children as well as a feature that pulls deep from the archives called “The History of Pope Visits to the US.” In addition, ABC News Digital will expand its “In A Minute” series with “Pope: IAM.” All ABC News Digital content will be featured on a special POPE & THE PEOPLE portal page.

ABC News Radio will cover each and every leg of the Pope’s journey beginning in Havana with Correspondent Aaron Katersky, continuing through the nation’s capital with Correspondents Mary Bruce, Stephanie Ramos and Jim Ryan. In New York City Correspondents Katersky, Scott Goldberg and Brad Mielke will cover events during the Pope’s trip, and Ryan will also report from Philadelphia.  ABC News Radio will enhance its coverage by offering one-minute Status Reports twice an hour and include a team of high-profile papal experts to complement its coverage with context and color.