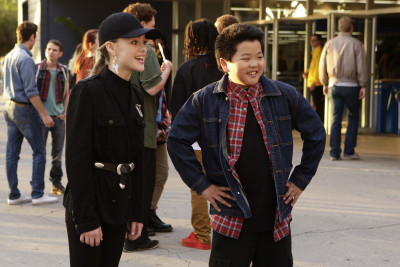 With Valentine’s Day less than two weeks away, ABC is getting romantic. During the week leading up to Valentine’s Day, the network has holiday-themed episodes of Dr. Ken, Fresh Off the Boat, and The Goldbergs, a Charlie Brown double-feature and a Bachelor special lined up.

ABC celebrates the most romantic time of the year, Valentine’s Day, with special episodes of “Dr. Ken,” “Fresh Off the Boat,” and “The Goldbergs,” along with two classic Charlie Brown specials and “The Bachelor at 20:  A Celebration of Love.” Below is a list of highlights, all times are EST.

“DR. KEN” (8:31–9:00 p.m. ) “Dave’s Valentine” – After Ken helps Dave in asking a girl he likes to go with him to the Valentine’s Day dance, the plan quickly goes awry when Ken finds out that her dad (guest star Joel McHale) is the well-known and rich malpractice lawyer whom he’s had issues with in the past. Can these two “adults” put aside their dislike of each other for the good of their kids?  Meanwhile, Julie changes her Valentine’s Day party into a Presidents’ Day party to cover up her rejection from Topher (guest star Danny Pudi).  So when Topher suddenly shows up, Damona and Clark provide their support.

“FRESH OFF THE BOAT” (8:00-8:30 p.m.) “Love and Loopholes” – Honey and Marvin babysit the boys so Jessica and Louis can enjoy a Valentine’s Day evening out.  But Emery makes an alarming discovery when he walks in on his parents’ special alone time.  Meanwhile, Eddie pulls out all the stops to take Alison to the Janet Jackson concert. Grammy Award-winning producing duo Jimmy Jam and Terry Lewis guest star.

“THE GOLDBERGS” (8:30-9:00 p.m.) “Hello” – Beverly forbids Adam to see the R-rated movie “Porky’s,” so Murray pushes him to break the rules.  But the plan backfires when Beverly forbids Adam to use the phone for Valentine’s Day.  As a result, he takes the rule-breaking to a whole new level.  Meanwhile, Barry tries too hard to impress Lainey for the holiday, using the legendary music of Lionel Ritchie.

“BE MY VALENTINE, CHARLIE BROWN,” “A CHARLIE BROWN VALENTINE” (8:00-9:00 p.m.) “Be My Valentine, Charlie Brown,” the 1975 special produced and animated by the same team that gave us the now classic holiday specials and taken directly from the late cartoonist Charles M. Schulz’s famed comic strip, will air with the classic “A Charlie Brown Valentine.” In “Be My Valentine, Charlie Brown,” hearts are fluttering on Valentine’s Day at Birchwood School, and Linus has brought a huge box of candy for his homeroom teacher. Thinking that the candy is for her, Sally reciprocates with a homemade card for Linus. Meanwhile, Lucy demands some affection from Schroeder, and Charlie Brown waits for his cards in the mail… and waits… and waits… In “A Charlie Brown Valentine,” Charlie Brown finally works up the courage to call the little red-haired girl to ask her to the Valentine’s Day dance. But once again he ends up broken-hearted and empty-handed when he dials the wrong number and reaches Peppermint Patty instead.

“THE BACHELOR AT 20: A CELEBRATION OF LOVE” (8:00-10:00 p.m.) Romance is definitely in the air as we take a look back at 20 seasons of “The Bachelor” and the fantasy of love – as well as the rollercoaster ride of falling in love. Viewers will catch up with some of their favorite Bachelors and Bachelor couples of all time and discover how these love stories have continued long after their final rose ceremonies. Then, Bachelor Nation is invited to another wedding, as Jade Roper and Tanner Tolbert, the newest sweethearts, tie the knot. Chris Harrison hosts the two-hour special.