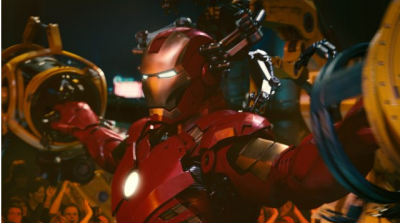 Iron Man 2 is one of those movies that is perplexing to me. If you ask the question – did I enjoy it, I would say, yeah, sure, it’s a big dumb action movie, but man is it a disappointing mess that’s all over the place, with no real highs. The original Iron Man wanted to be more than a common summer action movie and largely succeeded. It was amazing but left me feeling cold, this one I connected with a bit more but there are issues. Starting with, Downey’s portrayal of Tony Stark as a narcissistic booze hound with very little depth.

This is where I tell you that I was an avid Iron Man collector back in the day and own the original Demon in a Bottle series, so yes, I am aware that the one foe that Tony Stark can’t defeat is himself.  None of that nuance and self-loathing is here in this story. It’s just hey look at me; I’m a fun drunk in an Iron Man suit.

There’s this really long party scene that’s just bad on so many levels, including Iron Man as DJ, Iron Man Bathroom humor, etc. This nightmare of a scene ends in a pointless fight where the punch line is Rhodey (Don Cheadle) just takes off in one of his Suits and Tony doesn’t care.  Even when he sobers up he doesn’t care that his supposed best friend just took his Armor and handed it over to the military.  In Demon in a Bottle it was the discovery that his tech was stolen that sort of sobered him up and he went on a rampage called Armor Wars. Here it’s not even on his radar. This is the point where the movie basically lost me. 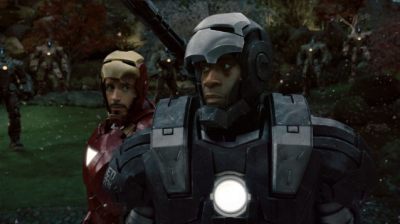 Director Jon Favreau shocked us all with how good the first Iron Man was, this time it feels as though he’s trying too hard to top himself, but getting lost in all the various plot threads and not doing much to make this movie materially different than the first. The movie is surprisingly light on action, but the 3rd act works surprisingly well.  For some reason it just bugged me and took me out of the movie every time they showed Tony and Don in the suits but with the helmet up.

After waiting an entire movie for Scarlett Johansson to do something as Black Widow we finally get a brief moment off it and I was thinking I’d rather watch a spin off with her kicking butt than watching her strut in and out of a scene, barely saying anything. She’s got some skills and loved the fight choreography here. Mickey Rourke was just terrible, he’s the main bad guy but they didn’t give him much to do or say.  The same goes with the before mentioned Don Cheadle, Rhodey is supposed to be Tony’s best friend but I never felt any chemistry between him and Downey. They talked past each other but never at and I never felt like there was a bond between the two. 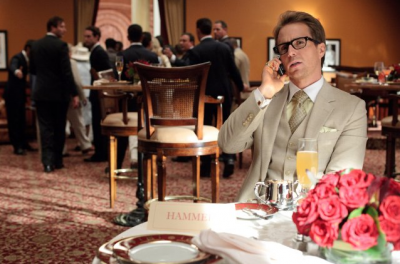 I loved the introduction of Happy Hogan into the film series and Favreau played him perfectly, the continued relationship between Tony and Pepper were also fantastic. I loved the line towards the end where Tony says “I lost the kids in the divorce.” All three played off of each other perfectly. The real star of this movie is Sam Rockwell; he manages to walk the thin line between making Justin Hammer  a weasel but still remain sympathetic and relatable. His description of how he’s going to upgrade Rhodey’s Armor is awesome. He’s the guy in the room who is generally happy and holding court until the cooler, flashier, funny, guy that only other popular kids like but the rest of us despise.  We’ve all had those Justin/Tony moments at some point in our lives. When the chance comes to upstage the flashy jerks we all take it.  That’s Justin Hammer, he sees what Ivan was able to do to Iron Man and jumps on the opportunity to upstage Stark.

I hear there’s a Thor cameo after the credits and if that’s true I’m going to be upset. I LOATHE when directors throw extra scenes at the end of long credit sequences. It always makes me feel like I’ve been cheated and missed out on some big reveal.

Favreau used pretty much all of the gadgets and SFX from the first film so there was nothing here that felt unique and different – just more. More suits, more shots of Tony in the hot Audi, the Captain America Shield wasn’t a subtle nod this time, Sam Jackson had a fuller part and there was too much time spent setting up the future Avengers movie. Nothing about this installment is subtle – I don’t mind when things are over the top when they are good.

Before I walked into the screening I told one of my critic friends that this crop of summer movies are pitiful and that the summer season basically starts and ends with Iron Man 2. If that’s the case we’re in for a long four months. Iron Man 2 isn’t a bad movie, its kind of fun in parts, but all the originality and passion from the first movie is gone.