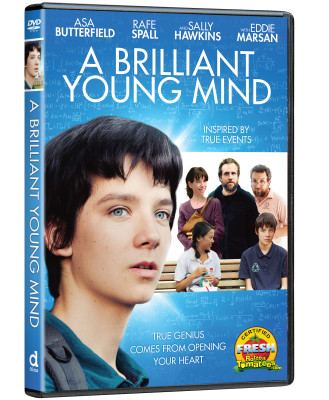 Nathan Ellis is a brilliant young man – math is like breathing for him – who sits ‘on the spectrum’ as his doctor puts it.

Since his father died when he was a toddler, he’s been incapable of giving or receiving love – which makes things hard for his mum, Julie. When he discovers math, it gives him a way to deal with his life, if not that of others – until an unorthodox tutor, Martin Henderson, enters their lives.

Based, in part, on mathematician Daniel Lightwing, Nathan (Asa Butterfield, Hugo) doesn’t understand why he’s different and has only his maths as his refuge. His mother (Sally Hawkins) tries her best but – since Nathan hates being touched and is uncomfortable when other people’s emotions are openly expressed – she can only express her love in the smallest of ways, like making sure his favorite Chinese meal has only seven prawn balls instead of eight (it must be a prime number).

The scene in which she comes very close to losing it because the new guy at the shop can’t understand why she’d want only seven of the eight prawn balls, is as powerful an expression for love and frustration as anything you’re liable to see in a year’s worth of other films.

Fortunately for Nathan, he comes under the tutelage of Martin (Rafe Spall), whose odd sense of humor and willingness to spend time with Nathan and his idiosyncrasies. Before long, the young lad is impressing others and finds his way onto a trip to Taiwan to prepare for a test that would earn him a place on the UK team for the International Math Olympiad.

While he’s away, Martin and Julie have a chance to get to know each other better – and Nathan finds himself no longer the weird kid in his group.

His trip to Taiwan has other benefits – not one, but two girls show an interest in him and he actually makes a friend or two. He also begins learning Mandarin from a language guidebook (Lightwing speaks Mandarin fluently, so this is one of those things that feels like a movie device but isn’t),

Butterfield is fine as Nathan. He’s exceptionally good at capturing the boy’s intensity and love of math – as well as his confusion in regard to why other people seem to behave in such a disorderly way.

Spall is nicely gregarious and deflecting as Martin – who says the onset of his muscular dystrophy was what kept him from making the UK’s Math Olympiad team but more likely didn’t really want to go.

Eddie Marsan is also very good as Richard, the jovially tough overseer of the kids trying to make the UK team.

If that was all there was, that would be enough to recommend A Beautiful Young Mind – but there’s that performance by Hawkins. Julie wants Nathan to be happy so much that she has clamped down on feelings to keep him from feeling uncomfortable – most likely the fear that she’d lose him entirely also plays a part.

The thing is, her performance is so open and nuanced – even in its most controlled moments – that Julie becomes a character we all just want to hug.

If the last act of A Beautiful Young Mind seems a bit too, well, movie-ish, the truthfulness of the story and performances are more than enough to make up for any storytelling awkwardness.

It might have been a good idea to include a couple featurettes about Daniel Lightwing and the International Math Olympiad, or even a commentary track, but the bare bones DVD means that there are no poorly executed extras to detract from what is a very affecting film.