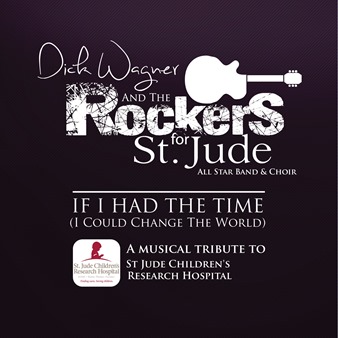 St. Jude Children’s Research Hospital® is dedicated to one things saving children’s lives. It exists through the generosity and vision of the late Danny Thomas. When a child is admitted to St. Jude’s the family is not required to spend a dime on treatment, travel, accommodation – the hospital’s position is that the family should have only one focus, the health of their child.

In the tradition of of We Are the World, fifty classic rockers have banded together as the Rockers for St. Jude and recorded a single called If I Had the Time (I Could change the World). Written by legendary guitarist/songwriter Dick Wagner (Aerosmith, Alice Cooper Lou Reed, KISS) – and featuring Mark Farner (Grand Funk Railroad), Trini Lopez, Chicago founder Danny Seraphine and many more – the song is available now on download sites. Fifty cents from each download will benefit the work of St. Jude Children’s Research Hospital® in finding cures for pediatric catastrophic diseases.

For more, check out the press release following the jump

(Los Angeles, CA) December 16, 2013 – In one of the most memorable collaborations since “We are the World,” the Rockers For St. Jude, a gathering of celebrated musicians from the history of rock n roll, joined talents during The Rock n Roll Autograph Show in Los Angeles to record “If I Had the Time (I Could Change the World).”  Available now on digital download sites, fifty cents from each download of the song will benefit the work of St. Jude Children’s Research Hospital® in finding cures for pediatric catastrophic diseases.  The Rockers for St. Jude challenge rock n roll fans around the world to spread “rock n hope” by downloading and sharing the song this holiday season.

The benefit song is written and produced by legendary lead guitarist and songwriter, Dick Wagner (“The Maestro of Rock,” Alice Cooper, Aerosmith, Lou Reed, KISS).  Wagner tells us,“There is more love in the human heart than can ever be given away. This song is about giving a small part of that endless supply in your heart.”

“When I wrote this song to benefit St. Jude children, I thought about what a song can mean in the context of our inner lives, the part that is willing to give, to help others in a time of need.  “If I Had the Time (I Could Change the World)” embraces the notion that we can do something positive to help change lives,” Producer Dick Wagner says.  “The children are the purpose of this song. By downloading this song, we can all make a difference – one download at a time.”

“If I Had the Time (I Could Change the World)” is available for download worldwide. Buy it on iTunes, Amazon.com, cdbaby.com, and on digital download sites around the world.  The perfect holiday gift from the heart!

Become a ROCKER FOR ST. JUDE on Facebook: facebook.com/RockersforStJude

Download the song here to donate to St. Jude!
https://itunes.apple.com/us/album/if-i-had-time-i-could-change/id744968422

The Rockers for St. Jude record “If I Had the Time (I Could Change the World)” at Sunset Sound Studios, Hollywood CA. Photo Michael Easley