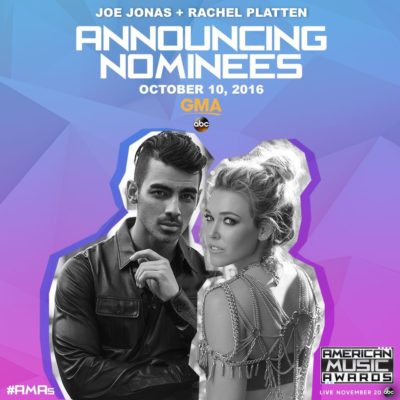 ARTIST OF THE YEAR

NEW ARTIST OF THE YEAR UN-LEASHED BY T-MOBILE

COLLABORATION OF THE YEAR

TOUR OF THE YEAR

VIDEO OF THE YEAR

Drake leads this year with 13 nominations and sets a new AMA record for most nominations in a single year, surpassing Michael Jackson’s previous record of 11 nominations in 1984.  Rihanna received seven nominations and Adele and Justin Bieber received five each. Beyoncé and The Chainsmokers each received four nominations.  Additionally, Bryson Tiller, Twenty One Pilots, Carrie Underwood, Fetty Wap and The Weeknd earn three nominations each.

The Artist of the Year nominees are Adele, Beyoncé, Justin Bieber, Drake, Selena Gomez, Ariana Grande, Rihanna, Twenty One Pilots, Carrie Underwood and The Weeknd.  The ten nominees will be narrowed to five based on the votes received through Monday, November 14 at 8:59:59 a.m. PST. Voting for Artist of the Year will close on Thursday, November 17 at 8:59:59 p.m. PST. The winner will be determined by the total votes received throughout the entire voting period.

Nominees for New Artist of the Year Un-leashed by T-Mobile are Alessia Cara, The Chainsmokers, DNCE, Shawn Mendes and Zayn. Voting for this category opens November 2.

The American Music Awards winners are voted entirely by fans. Voting opened today in all categories except New Artist of the Year Un-leashed by T-Mobile, which will open on November 2.

About the American Music Awards

The American Music Awards, the world’s biggest fan-voted award show, features performances from today’s hottest artists and presents fan-voted awards in the categories of Pop/Rock, Alternative Rock, Country, Rap/Hip-Hop, Soul/R&B, Adult Contemporary, Contemporary Inspirational, Latin, EDM and Soundtrack, Artist of the Year, New Artist of the Year Un-leashed by T-Mobile, Collaboration of the Year, Tour of The Year and Video of the Year. The American Music Awards pays tribute to today’s most influential and iconic artists.  The show is produced by dick clark productions and is seen in more than 200 countries around the world. For more information, visit www.theamas.com, www.dickclark.com or abc.go.com/shows/american-music-awards.