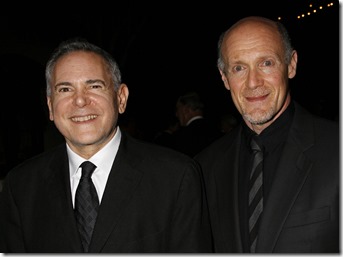 2013 Oscars® producers Craig Zadan and Neil Maron have signed to produce the 2014 ceremonies. I imagine they’ll have to really search to find a host that can top Seth MacFarlane’s energetic job at this year’s show.

The acclaimed motion picture, television and theater producing team of Craig Zadan and Neil Meron will return to produce the Oscars for a second time next year, Academy President Hawk Koch announced. The Academy Awards® will air live on ABC on Oscar® Sunday, March 2, 2014.

“Craig and Neil have the overwhelming support of the Academy’s Governors to produce the Oscars again in 2014,” said Koch. “In order to establish continuity with this year’s enormously successful show, we felt it was important to give these consummate professionals the green light now to begin creating another great evening.”

“We are very honored to have been asked to return as Oscar producers for a second year,” said Zadan and Meron. “We look forward to creating a distinctive and entertaining show.”

“Craig and Neil have great relationships, a sense of showmanship and a passion for our Academy,” said Academy CEO Dawn Hudson. “And they’re a pleasure to work with. All perfect qualities for our show.”

Among the innovations that Zadan and Meron plan to bring back to the 2014 show is the Oscar Experience College Search, which allows young filmmakers to assist with bringing the Oscar statuettes on and off stage during the show. The Zadan/Meron Oscars displayed a signature style that incorporated a single concept for the entire evening which linked together the disparate elements of the Oscar show through music — especially classic movie themes — and the frequent appearances by MacFarlane to announce the evening’s presenters. The 2013 show was also distinguished by the use of motion picture talent as performers in the show, such as the dance numbers performed by Charlize Theron, Channing Tatum, Daniel Radcliffe and Joseph Gordon-Levitt.

Zadan and Meron served as executive producers for the 2002 Best Picture winner, “Chicago,” which won Oscars® in 6 of the 13 categories in which it was nominated. Their credits also include the features “Footloose” (2011), “Hairspray” and “The Bucket List.” Zadan produced the original “Footloose” (1984). Zadan and Meron’s work in television includes the series “SMASH” and such movies as “A Raisin in the Sun” and “Steel Magnolias.” For Broadway they recently produced the Tony Award®-winning revivals of “How to Succeed in Business Without Really Trying” and “Promises, Promises.” Their work has amassed 73 Emmy® nominations, 12 Tony nominations and seven Grammy® nominations.